Why Commitment Feels Hard (& How To Make It Easier), Part 3: Stop Confusing Relief With Intuition 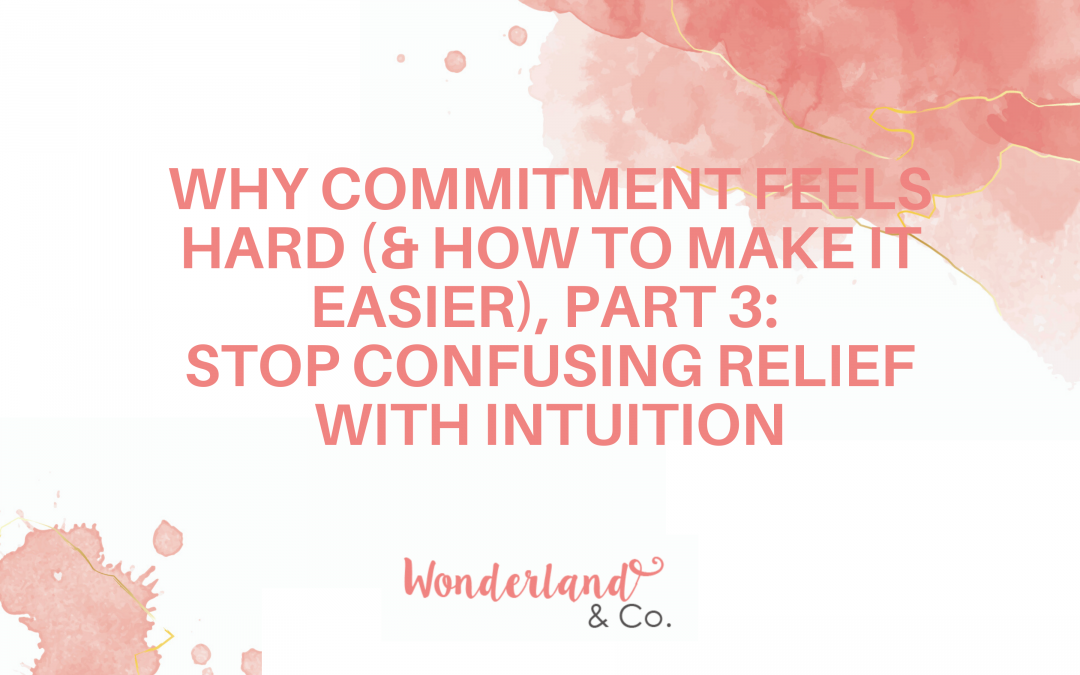 This is it: the final instalment in the three-part why-commitment-feels-hard-and-how-to-make-it-easier series.

We’ve covered the natural reasons we tend to shy away from commitments, which is normal and human of us, because of how our ancestors learned to survive. We’ve also learned that commitments require energy, and therefore, they are subject to the universal laws that govern motion. 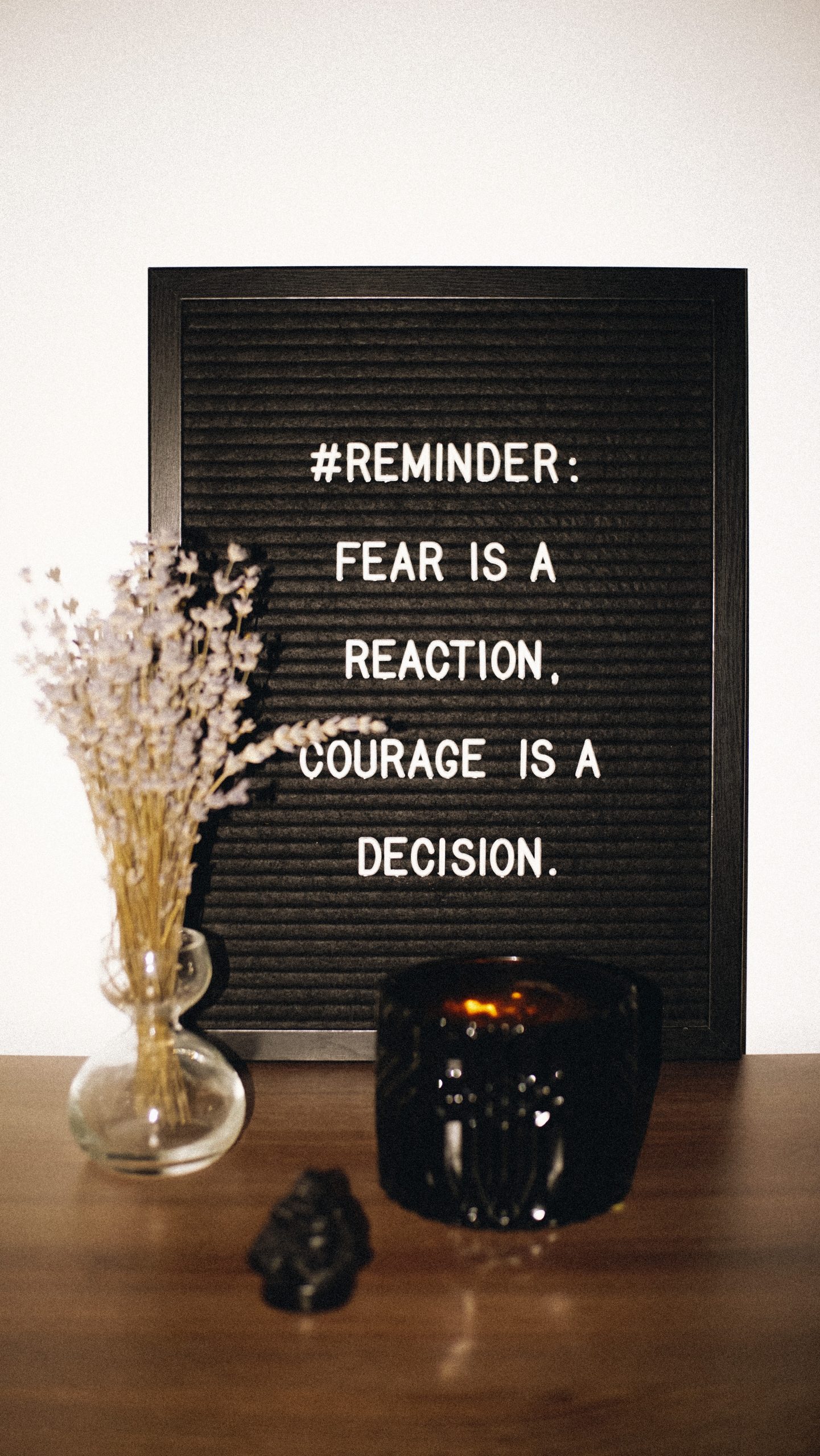 The last reason we’ll look at here has to do with feelings. Now, if we want to make commitment feel easier, which most of us do,  then we’ll need to move out of the realm of how we feel about making the commitment (which is likely nervous, because as we’ve previously learned: #biology #physics), and move instead into the realm of how we feel about the object of the commitment itself and why we’re even contemplating it in the first place.

And just for the record, by “feel easier,” I don’t necessarily mean it won’t still be scary. I mean it’ll be more obvious why it’s worth doing the damn thing even and especially while you’re scared.

What this means is that we need to create a vision compelling enough to call us out from behind the mantle of our fear. Of course, this is tricky business because ironically, if you desire something enough—that is, if there is enough possibility to make the commitment compelling—then fear is absolutely going to show up.

To make matters worse, we don’t like feeling afraid, so we get all heady about whatever we’re feeling, because we think (there’s our first problem) that if we intellectually understand why we’re having a feeling, we won’t feel afraid anymore. That’s cute, isn’t it?

When we feel afraid, we think something is wrong. Fear feels bad, so we tend to view fear as a problem to be avoided or resolved as soon as possible.

We can’t think our way out of a feeling. We know this because we’ve all tried to but it doesn’t work. Mostly we just wind up repressing fear that will out itself later, a little bit louder and a little bit worse.

Fear and possibility are always equally matched. If you want something badly, you’re going to have ample anxiety about going after it. If it doesn’t matter that much to you, then you won’t be losing too much sleep over it, either.

And when it comes to commitment, there can be a lot of fear: fear of the unknown and how it will go, fear of what it might cost us, fear of our ability and capacity, fear of making the wrong choice or the fear of making a mistake.

One way we get out of that fear is to simply choose out of the commitment. You choose out and then, poof! Just like magic, all that stress and turmoil disappear. I mean, so too does the possibility that the commitment represented, but, hey, at least you don’t feel nervous anymore, right?

The easiest way to relieve ourselves of our discomfort is to opt out of a commitment and then call the ensuing relief that we feel “a sign from our intuition.”

It’s like stopping a leg workout midway because your quads are burning from doing squats. You’ll feel relief in your muscles when you drop the effort, but you won’t get the results you want, either.

Actually, the relief you feel is due to all the neurological/biological processes I’ve outlined in Part 1 of this series, in which your brain views any commitment as a potential threat to your survival. The relief we feel when we choose out of a commitment isn’t necessarily a sign that we’ve made the right choice. It’s mostly just a relief to make any choice, period. And typically, the choice that releases us from any investment of our effort is going to feel like a relief. A choice informed by our intuition is going to feel aligned and right, whether it’s daunting or not. And I don’t mean “right” as in the opposite of wrong. I mean “right” as in right in your soul.
Remember, whether our choices are right or wrong is merely a decision we’ll make after the fact. It’s a function of whether we are in the habit of calling our choices “right” or “wrong.” The evidence we collect afterward is mostly just confirmation bias, no matter how you’ve labeled the decision.
Don’t get me wrong: intuition is a powerful force. I’m all for intuition. Big fan over here. But I hate to see intuition co-opted by using it as an excuse to get out of the discomfort of our decisions and our desires. That’s your fear masquerading as your intuition. It’s Fear, parading around, wearing Intuition’s clothes, making all your decisions from fear and keeping you safe by keeping you small. Calling that intuition is a spiritual bypass that will only leave you feeling less rather than more able to not only choose difficult things but also to do them.
The more we practice outsourcing our willingness to make commitments to our fears, feelings, and doubts, the better we get at avoiding commitments and the harder it becomes to listen to our intuition, let alone trust it. Intuition is a powerful kind of magic we don’t really want to muddy up.

Interestingly, while people often cite their intuition as the reasonable reason to choose out of a commitment, they rarely credit their intuition when they’ve decided to throw their hat in the ring and go for it. Coincidence? I doubt it…

So what can we practice instead of pretending we’re listening to our intuition when it comes to making commitments?

Well, for starters, we can get clear on ALL of our feelings about the commitment. What is the good, the great, the bad and the ugly when it comes to the swirl of emotions surrounding the object of the commitment in question?

As cliché as it may seem, we want to get clear on the pros and cons of a potential commitment. But we need to be aware of whether we tend to focus only on the possible costs or the possible benefits.

For example, if you only look at the pros, you’ll make the commitment, sure, but you might be devastated by the inevitable challenges and obstacles, which may leave you susceptible to burning out or flaking out. Do this enough, and you won’t trust yourself when it comes to making any commitments moving forward. Your fear will thank you for convincing yourself you aren’t to be trusted.

Alternatively, if you only look at cons, you’ll never ante up and make the commitment because there’s not enough in it for you to be a yes in the first place. You’re not a fool: you’re not going to make an investment when you know from the outset that it’s got a poor ROI.