Why Commitment Feels Hard (& How To Make It Easier), Part 2: The Physics of Goals 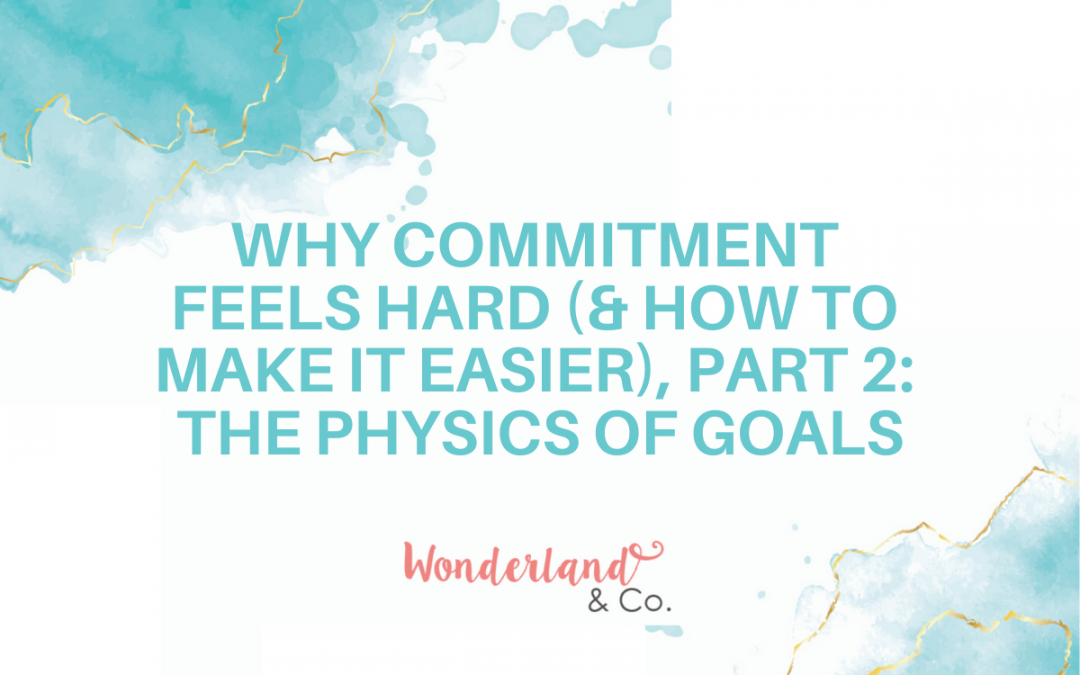 We all know that when it comes to making a commitment, we can feel all kinds of things, a lot of which are not particularly enticing. Commitment can feel hard. It can feel like you’re being trapped or stuck.

In part one, we looked at why we feel this way. Remember, we are biologically wired to be wary of commitment and conservative with our energy. It’s not just commitment, though; we’ve evolutionarily adapted to be wary of just about everything in order to survive. Our fear has been our winning strategy and you’re still here, so it’s worked, which is great.

Remember Newton’s Laws of Motion? Don’t worry if you don’t have them handy, I checked them on NASA’s site:

The way I see it, these laws apply to commitment, too. The first law is about inertia and momentum. This means that if a thing is not going, it will remain not going unless some significant force is applied to get it started. It also means that if a thing is going, it will keep going unless something gets in the way, applying significant enough force to stop it. 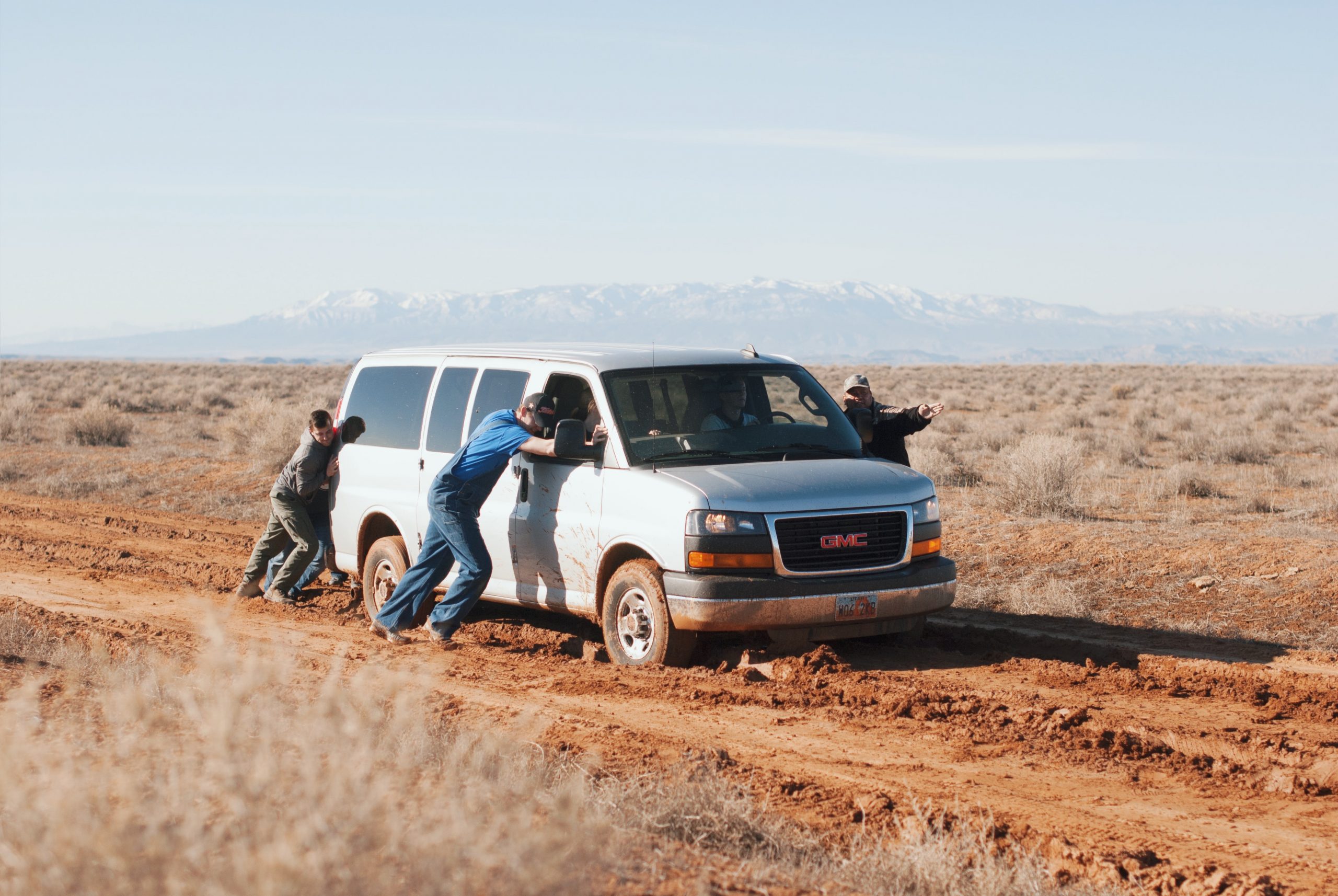 This is good and bad news. It means that the reason it’s hard to start new things is because, well, it’s hard to start new things. It really takes something extra to kickstart something new and get it rolling. This is the “bad” news: it requires extra energy to begin something, whether you’re starting your car, powering up your computer, trying to adopt a new habit or dive into a new project. It requires an input of energy that wasn’t being spent before to get the engine going. We already know this, because of how daunting a new commitment can feel. Even trying to wake up 15 minutes earlier can feel like a monumental endeavour when you’re shifting your morning alarm.

That new energy required to get started and gain some momentum? You can use all kinds of energy to fuel that first push, but some will be more effective and some will be more costly. Desire is a great fuel. Pair your desire with a clear vision and you’ve got a neat little renewable resource. Desire is like the solar power and your vision is like the solar panel and a great battery, all in one. The more attention you give your vision, the more power you get.

Now, you can also use fear or obligation as fuel, but these tend to burn pretty hot and fast. Fear and obligation are volatile energies: they can send you rocketing off with impressive urgency, but they don’t necessarily hold fast to a particular direction. Also, you’re likely to burn out pretty quickly, running out of go-go juice when you’re out in the middle of nowhere, leaving you feeling lost, even more afraid and losing faith in yourself and your ability to do whatever you’re trying to do.

Now, the good news about momentum is that once it’s going, it’s much easier to keep it going than it was to get it started. Once you’ve got some momentum in a habit, you’ve probably noticed that the habit feels a little easier to keep up than it did to start with in the beginning. Once you get used to doing the new thing, you feel like you’re on a roll. Plus, our brains like to create a winning streak: once you get started, you don’t want to break the chain.

The second law points to how commitments tend to go. If mass is the size of our milestones or actions, then we want to break big milestones down into small actions. If they’re too big, the mass of the commitment is unwieldy and we’ll get stuck feeling overwhelmed or hopeless. The force being applied is the structure and discipline sufficient to actually take real action—not just talk about it ad nauseam.

If we combine commitments that inspire us with milestones that call us forward and real actions that are doable, our objective will accelerate and our commitment will move forward. Alternatively, if we keep the mass of the commitment too small, we might let ourselves off the hook, procrastinating and getting bored by the project, or becoming uninspired by our lack of progress, which means our commitment will come to a grinding halt, sometimes before we’ve even gotten started.

It’s a little like Goldilocks: we want to break the mass of our commitment down into manageable chunks—not too big, not too small—so we can apply the force required to get ourselves in action and on a roll.

Now, the third law is about that invisible force that seems to keep us from moving our commitments forward or from even making commitments at all. When we begin to move a commitment forward, it often feels like something is pushing back on us. This isn’t imaginary: this invisible force is resistance. The resistance might be ours, or it might be someone else’s. Sometimes it just feels like the Universe is pushing back against us. Just like gravity, when we try to go up, it feels like something is trying to push down on us.

The thing about resistance is that it shows up everywhere that we are. A ball rolling on the ground has to contend with friction and so do we. Time, resources and our myriad thoughts and feelings about everything, all the time? These are the forces of resistance we feel pressing in on us in the face of making or keeping our commitments.

But what if, instead of being surprised by the equal and opposite forces that arise, we could anticipate our resistance and focus more on the first two laws of motion: the ones that help us gain momentum and acceleration?

I personally find it very helpful to look at my goals and the projects I create to support them through this lens. It means that if I’m finding it hard to make or keep a commitment, there’s nothing wrong with me or with the commitment. It’s just the natural law of physics, which apply to me because they apply to everything.

Instead of trying to figure out what’s wrong with me because I’m stuck, I can use these simple diagnostics to look at all the moving parts (or the parts that aren’t moving, as the case may be) and understand what’s missing from the equation, and then go about putting the missing piece in.

Am I struggling to get started? Maybe I need to do something to bust up my inertia (maybe it’s adding a reward to the first action, or creating some accountability to call me forward). Am I stalling out midway? Maybe my milestones are too big (intimidating, unrealistic or overwhelming) or too small (not enough bang for my buck so I don’t bother) and I need to revise the steps to be more doable, appealing or interesting.

Then I can get busy moving forward, which I generally find to be more enjoyable than staying stuck.

If you look at your commitments through the laws of motion—your motion, in your life—what do you see? Which laws typically trip you up?