Thou shalt not and then some. 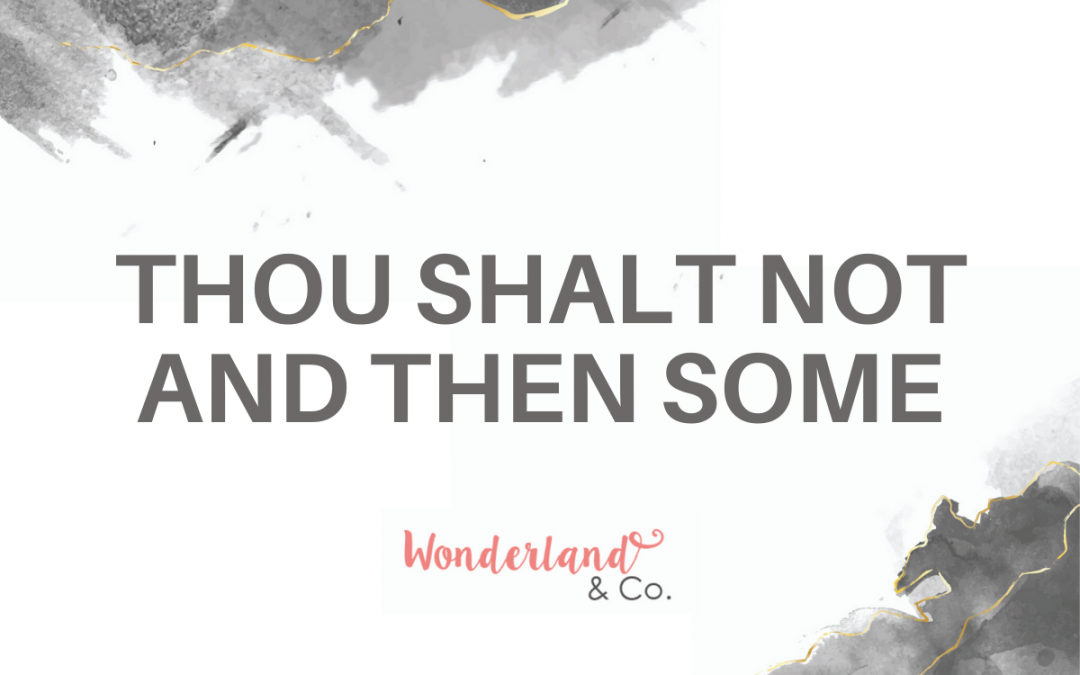 “I am free, no matter what rules surround me. If I find them tolerable, I tolerate them; if I find them too obnoxious, I break them. I am free because I know that I alone am morally responsible for everything I do.” – Robert A. Heinlein

Some people are born rebellious. Some are born obedient or compliant. Others still (and I’m guessing that this is actually where most people fit, myself included) are somewhere in the middle, choosing which rules to follow and which to bend. See, I’d have thought I was a born-obedient/compliant kind of girl. I follow the rules and become  annoyed when other don’t. After all, “It’s The Rule!”

Here’s a little secret: I totally break rules. I regularly drive 10 kilometres over the speed limit. I park in designated “small car “spots. Yet, when I see a van or SUV parked in a “small car” spot, I’m the first to say, “Come on: There’s no way you can call that thing a small car. Nice try.” I justify my own actions, while I make a judgment and condemn anyone else doing the same. It’s totally subjective and pretty ridiculous, too, since the only person suffering is me, as I march around full of judgment and criticism about something that actually has no effect on my life whatsoever. Very empowering.

That’s the thing with rules: They can be kind of subjective. They may sound pretty firm, but when it all boils down, we’re all of us going to define the rules differently, especially when we’re justifying why it’s okay for us to do what we’re doing. Remember, that’s why we need lawyers and judges (Why we need …. lawyers — insert link to Going My Way post) to interpret and apply the laws.

So, I’m a rule follower who sometimes doesn’t follow the rules to the letter. The thing is, it’s not always in service of our best interests, or others, to not weigh the consequences of our actions, rules aside.

For example, jaywalking is illegal (I totally jaywalk. All. The. Time.). But, what if you saw an elderly woman fall off the sidewalk and she was in danger of being hit? Would you wait [im]patiently at a cross walk to get to her, or would you sprint to the rescue (assuming it was safe to do so)? I’d be running across that street, pronto. And if I got a ticket for jaywalking, then so be it (but really? Really?). Helping someone who could get hurt is worth risking a fine, in my opinion/justification.

On the flip side, I think sometimes we follow the rules to avoid having to make difficult decisions or weigh the consequences. We get to be at-effect to the rules, with the locus of control outside of ourselves. It’s not our fault, we shrug. I don’t make the rules, we justify. It lets us off the hook of being an adult and having to make choices. If it doesn’t go well, then it wasn’t our fault.

“Rules help us live our lives when we lose the will to do it on our own.” – Yvonne Woon

I can see places all over my life where I followed rules that, as it turned out, never actually existed. For example, I was under the impression that I wasn’t allowed to wear makeup. The first time I really wore makeup was at my graduation prom (I’m not counting many dance performances that required pretty bad stage makeup). I also thought I wasn’t allowed to date. They weren’t house rules, I found out later, but I clearly thought they were, so my mom figured she’d just let me keep on following them. Probably a lot of parents would do the same.

[Tweet “I’ve followed rules that, as it turned out, never actually existed.”]

What I was doing here was adding more commandments to be followed in my life. But really, not being allowed to date gave me an easy out when it came to avoiding awkward conversations I didn’t want to have. I couldn’t just say no without an excuse, I thought, so I had this handy dandy rule I could fall back on. “I’m so sorry, but you see, it’s not my fault—my mom won’t let me date.”

It seemed kind, at the time (and easier, if I’m being honest, than sharing what I really felt). Really, though, it wasn’t very authentic. I also didn’t learn how to be clear with my intentions and desires, either. Let’s face it: If a boy for whom I’d been pining (there were two, just for the record) had asked me out, you can bet I’d have “bent” that rule pretty darned quickly.

When following the rules means you don’t have to think or make a tough call, then it might be a good place to look at why you’re blindly acquiescing. Unless you’re driving. Drive safely, my friends. Those rules are there for good reason, but still be paying attention, in case you need to swerve!

What can you see for yourself? Do you make the rules or do you break them? Do you invent new ones? How does your relationship to rules serve you? Are you using the rules to avoid the discomfort of choosing what you really want?