Going MY Way? And I do mean My Way 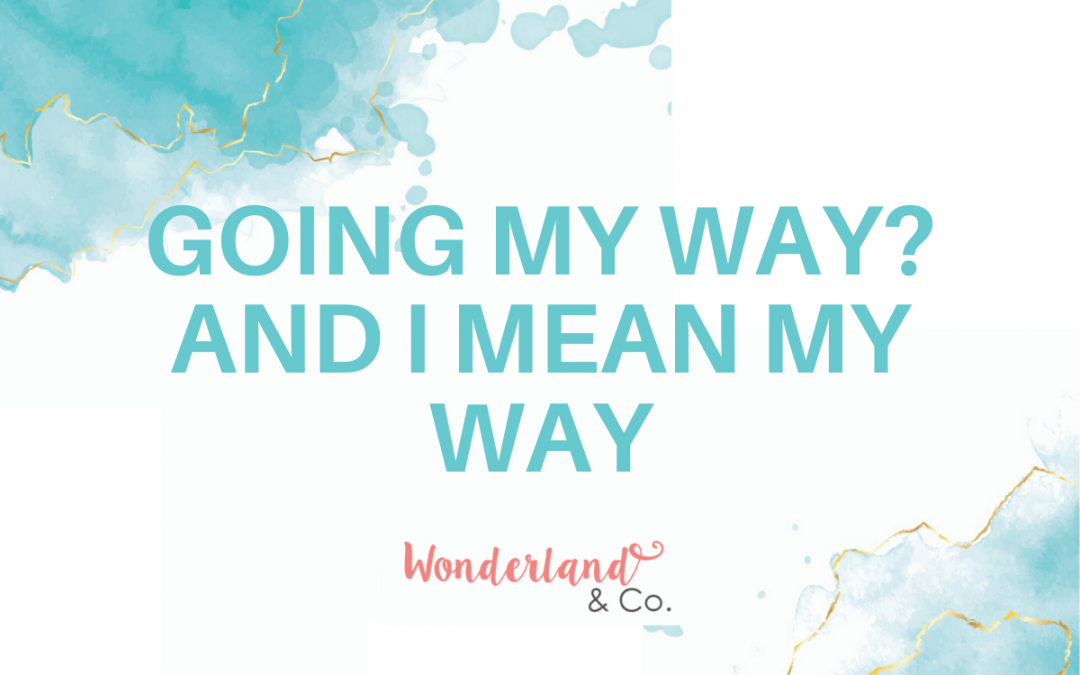 “All things are subject to interpretation. Whichever interpretation prevails at a given time is a function of power and not truth.” – Nietzsche

Obviously, right? Being expelled from school would’ve been a fate worse than death for me, too and writing lines when I broke the rules was torture (not the writing of the lines—I probably enjoyed that part, since I got to use chalk—but the fact that I’d needed admonishment). I even have the same hair as Hermione (then and now).

Now, I don’t necessarily think that’s a bad thing, because what would the world come to without some general order and direction guiding the way? I submit that it would come to total madness (spoken like a true rule-lover, right?).

Traffic, for one thing, would be utter insanity (or, depending on where you live, more utterly insane than it already is). I have been to many places in the world that make me grateful for the generally law-abiding, mostly rule-of-the-road-following population in the place that I call home. Sao Paulo, Rio de Janeiro, Bali and Hong Kong: Being a passenger is a lesson in trust and vulnerability. Even France confounded me: Try as I might, I was not able to sort out the rules of the roundabout that goes, well, around about the Arc de Triomphe in Paris:

I mean, seriously. This does not look effective.

On the other hand, however, I don’t think it’s necessarily good to always follow the rules, either. Especially because it’s my Survival Mechanism that’s generally all up in the rules, getting all judgmental about being right and following the rules to avoid making decisions or being uncomfortable.

Sometimes, following the rules can be harmful. To keep the traffic analogy going, let’s look at right of way. Oh, how I love right of way. Sure, it’s great when you’ve got it, but what happens when someone else thinks they do, too? Or, they just decide to ignore the rules when you are determined to follow them, no matter the cost. The rules collide and so do you. The cost being potentially lethal or injurious, and/or a pretty hefty insurance deductible. How much are you willing to pay for the sake of being right?

I think we can agree that rules, when applied to the roadways, are a good thing, as long as everyone’s interpreting them the same way.

And therein lies the problem: How can you ensure that your interpretation matches the other person’s interpretation? Chances are, it doesn’t. And that is why insurance companies fare so well, financially.

The same goes for life. Chances are that certain things that people do get on your nerves (heaven knows enough things bug me). These are things that you hold as rules that should not be broken.

People jumping the queue, for example (“Oh, don’t even!”). People not moving over on the sidewalk (“Why should I have to step onto the road so that four people can walk abreast?”). Anything that makes you grumble under your breath, or mutter something passive aggressive (“No, really; that’s a great place to leave your shopping cart.”). Heck, maybe you even do things that are passive aggressive, to show them they must follow the rules and you won’t stand for it otherwise (“Oh, is my shopping cart now in your way? I had no idea…”).

Have you ever had someone sneak up with their car at the last minute at a turning or merging lane and gone all Gandalf—“You shall not pass!” on them? I know I’m not the only one…

I would assert that the need to follow the rules, beyond doing so to avoid risking injury, might say something about how you react/interact with power. As Nietzsche points out, your prevailing interpretation (and mine, too) is “a function of power, not truth.”

Because, really, who gets to say what the truth is? We pay lawyers and judges a hefty sum to determine the closest thing to truth, for the sake of justice, peace and order in our societies, because we realize that we can’t agree ourselves. We cede the reins of truth to those whom we grant the ability to remain impartial. With hundreds of years of precedent-setting case law, it still boils down to he-said/she-said and according to whom, dependent on each and every case, rules aside. And legal battles cost a lot, in time, money, emotions and stress.

How else might you deal with someone breaking a rule that you are following (or even yourself)? What about employing some compassion? Forgiveness? Empathy? Is it really such a big cost to let go of being right? What might you gain when you relax your hold on the rules (the ones that are safe to relax, that is)?

Hey! Thanks for reading our blog! Sign-up for our newsletter by using the form above (see it? It’s just up there, on the right, waiting for you to put in your email). It takes you two minutes, and you’ll get our updates compiled weekly right in your inbox. We won’t use your e-mail for anything other than our weekly updates, we promise.