How to Change the World: An Argument for Idealism 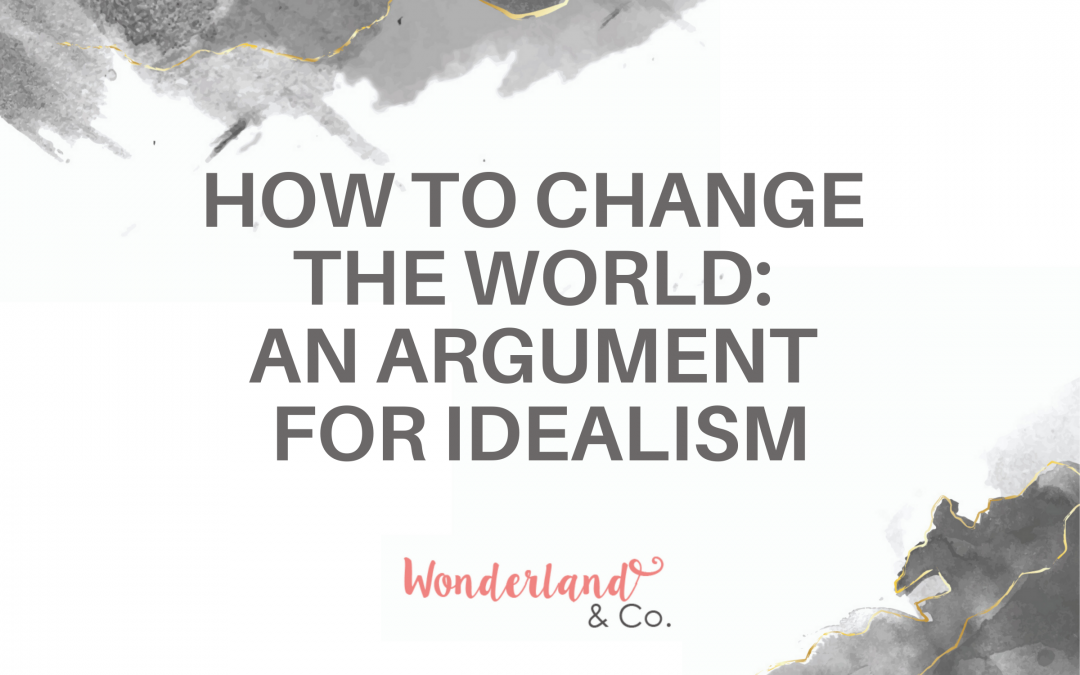 “But then,” my colleague pointed out, “you’re an idealist.” I got the distinct impression she didn’t mean it as a compliment.

And yet, I was flattered. I thought to myself, Well, of course I’m an idealist. What’s the point of not being idealistic?

This conversation took place maybe a decade ago, and yet that one comment still rings in my ears.

I’ve looked up the definition of idealist, and while it’s not terrible: “a person who is guided more by ideals than by practical considerations”, it’s not glowing, either. It fairly evenly implies that idealists are at best, impractical, though more likely to be somewhat ineffectual, silly and naïve.

Look up idealist in a thesaurus, and all the synonyms point to a childish daydreamer and wishful thinker. Only one word in the list stands alone as a good thing, be it noun or adjective: visionary.

So, I suppose my colleague, if she was being generous, was calling me a visionary. Or maybe she thought I was a pipe-dreaming romantic.

I could feel small about it, but then I read the antonyms of idealist: realist, cynic, defeatist.

You know what? I’ll keep my idealism, thanks.

If I weren’t an idealist, then I imagine my life would look a lot different. If I hadn’t wanted more and better and different than the scenario into which I’d been born, I doubt I’d be writing this to you. I don’t know if I’d have gone to university, or even bothered auditioning for an elite performing arts college. I probably wouldn’t ever have stepped foot in a ballet studio at all. I sure as hell wouldn’t have an MBA, and I wouldn’t be contemplating getting a PhD.

I imagine I’d have an unhappy or broken marriage, and I wouldn’t have seen much of this big, beautiful world.

I wouldn’t have my own business, and I wouldn’t have supported any of the hundreds of people I’ve worked with to create more magic in their lives, transforming relationships, careers and entire lives, because they believed it was possible.

So, damn straight I’m idealistic. I’d wear the t-shirt. I’m proud to be called an idealist. I plan to be one for as long as I live, because the alternative seems boring, small and depressing. And let’s be honest: life is hard enough without making it harder by taking out all the available possibility.

If we don’t believe in what might be possible, we become resigned to what is as the rule. Without the ability to hold a vision of what could be, then how things are is how they must remain.

Idealists stand in the face of apathy, which is probably just about the most dangerous quality on earth. Apathy allows things to continue as they are, whether that be merely uninspired, or downright harmful.

Not believing that people can be better and do better leaves us with the status quo, and in the hands of poor leadership, this can be catastrophic to entire nations, and to our planet.

A defeated, cynical perspective breeds apathy, indifference and resignation, pessimism and despair. And those will not change this world.

My god, if it weren’t for the idealists, we’d have a lot less of just about everything. If Ghandi didn’t believe in the possibility of a peaceful independence, India would still be under British rule. If Martin Luther King, Jr didn’t have a dream and talk about it, we wouldn’t have his guiding light to continue to fight for freedom and equality.

We wouldn’t fly in planes, we wouldn’t have made it to space, and we’d still believe the world was flat and bleeding a patient was an effective medical procedure.

Here’s what I figure: if we want things to be different or better, we must be able to imagine what that would be like, feel like, look like.

We need to be able to imagine a world in which racism, discrimination, poverty and hunger do not exist, in order that we might take any steps to creating that reality.

If we want to live in a world that runs on sustainable and renewable energy (which is, by the way, completely possible), or if we want to find cures to disease, we need to believe in a vision of humanity that can create it.

The thing is, we need to be idealistic, if we want things to change, in our lives, and in our world.

So don’t chastise the dreamers, or scoff at their lofty ideals. Don’t repress your idealism. Cultivate it.

Encourage yourself and the people around you to not simply speak woefully of the tragic circumstances of our present predicament, but to think about what it could look like instead, and what that might take.

And while even changing our thoughts and conversations is a worthy step to take, don’t stop there: take your ideals and put them into action, even if the steps feel small and seemingly insignificant.

If we aim for our ideals, we’ll end up closer to them than if we don’t aim for them at all. Anything less is a failure of imagination, and one that we can ill afford.

We are in a war, not against evil, but a battle against apathy, which allows darkness to spread, simply because we stop bothering to turn on the light.

So, wear your idealism proudly, and be willing to believe it can change the world. It’s the only thing that will.

“Do not go gentle into that good night.
Rage, rage, against the dying of the light.”
~ Dylan Thomas