What a Zip Line Taught Me About Regret 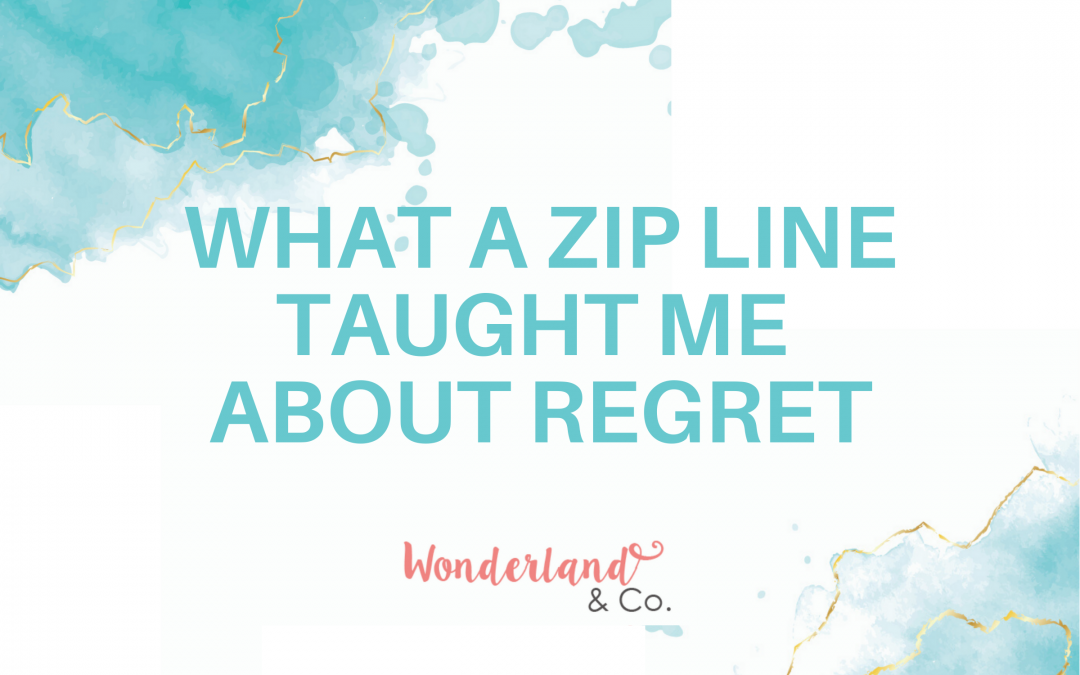 That title probably makes you think I’ve had a horrible adventure-based accident. I haven’t. I didn’t fall or slip or get stuck. But I did learn something, loud and clear.

First, though, tell me: how do you deal with regret?

If you’re like me, and—I suspect—like most people, then you probably mostly just try to avoid it altogether, because regret is painful, and largely useless, given that we don’t have a Time Turner or DeLorean and can’t go back in time to change the past.

But what if regret didn’t need to be avoided? What if those pangs of remorse and woulda-coulda-shouldas were useful signposts, catapulting us forward into the life we want to be living, and the people we want to be being, instead of time-consuming sand traps for self loathing and self pity?

Typically, regret leaves us feeling sad, bitter, resentful, helpless or victim-y. Like you did something wrong, made the wrong choice, or just are wrong, full stop. This makes sense, given the above-stated lack of time travel and subsequent inability to call a mulligan and have a do over.

This past weekend, I went zip lining with several members of my running group. Despite a pandemic and air quality so bad that it is literally off the charts, thanks to the massive fires burning across the Pacific Northwest, we masked up and headed out on a much-needed (at least for me) adventure. By the way, wearing a mask while flying through the forest makes you feel like a badass superhero.

Everyone had a blast. The guides were fantastic, hilarious, and thrilled to have a large group for the first time in a long time. They even taught us tricks. My favourite was the Peter Parker; flipping over and zipping upside down like Spiderman, shooting silks from your wrists while shouting, “Pew, pew, pew!” That last part was optional, but in for a penny, in for a pound, I always say.

In the midst of a pandemic, I’m finding these little getaways immensely gratifying to take, and what’s more important, I think, is that I’m taking them, period. It’s actually unpredictable for me to actively build adventure and fun into my “normal” life. Case in point; this zip lining place is about 45 minutes away from my house, it’s been running for 14 years, and yet, this was the first time I’ve ever gone. Normally, I’m busy making other travel plans for adventures that happen far away on time off, and convincing myself I’m too busy for local funtivities like these.

It never occurs to me to look for fun and adventure right here and now, where I am. And this is a familiar refrain in my ears. <>

What really struck me as I waited in the treetops was that this was a job you could do. Over and over again, I found myself thinking in awe, “I can’t believe this is their job.” Our guides had been leading zippers (is that what we’re called?) for two and three years respectively. I found myself, not for the first time, wishing I’d looked for summer jobs that had been more fun or more related to my interests than the jobs I worked during my university years and early twenties. I could have worked at summer camps, or hanging out with international students, or worked for whale-watching tours. I could have worked on a ranch, walked dogs, led museum tours, or been a lifeguard.

Instead, I worked in retail, then banking, then professional government jobs, as soon as I could get one. Back then, these jobs all required “appropriate hosiery” and I had to hide my tattoos. That should’ve been an alarm bell right then. I would choose my courses around my work schedule, instead of the other way around, so that I could work as close to full-time hours as possible. I didn’t join clubs or groups, or go on exchanges, and I even missed the opportunity to work on an archaeological dig in Jordan, two years in a row.

Not only did my grades suffer, but so did my overall experience of being a student in my late teens and early twenties.

Why did I make these choices? Because I was desperately trying to create the financial stability that I hadn’t had growing up, and because it literally never occurred to me that you could really enjoy what you did for income. I felt like I had to work, always. If I left one job, I always made sure I had another lined up first. Sometimes I worked more than one job, convincing myself it was fun to work as a restaurant hostess or shop salesperson after working all day at my other job (it wasn’t).

I regret those choices now. Or maybe, it’s more accurate to say that I wish I could go back and tell myself back then that I’d have all the time in the world to work boring jobs with knee highs, if that’s what I really wanted (I didn’t), but that I could be living an adventure right then. That it would all work out, and I’d be able to pay for school and I’d have student loans anyway so why not wrack up all that debt while really enjoying my experience, instead of becoming an indebted student workaholic?

I wouldn’t ever change where I ended up today, because I love my life, but I do wish I could go back and add in some of the adventure I actively suppressed.

This is how I use my regret: as a reminder to make choices in service of the experience of life I want to be living, not as a penance or punishment.

When people ask me for advice in the face of a decision, I ask them what they’ll want to reminisce about a year from now, a decade from now, or a lifetime from now. I don’t want to know what the smart choice is; I want to know which choice brings the light back into their eyes and stokes a fire in their hearts.

I’d love to say I never take the safe choice now. That I had a breakthrough and saw the light and never played small with my one, wild and precious (and fleeting) lifetime, as Mary Oliver put it. But that’s not true. It’s more like I continue to have these bolts of lightening that hit me in the head from time to time, and remind me that rushing through life the safest way possible is just a way of dying before I really live.

Instead of sitting around, regretting the ways I played small in the past, I ask myself, “What will you regret ten years from now if you don’t do this thing?” I let regret remind me to be courageous, and to take risks, and to live now, so that I won’t regret it later.