The Myth of Certainty 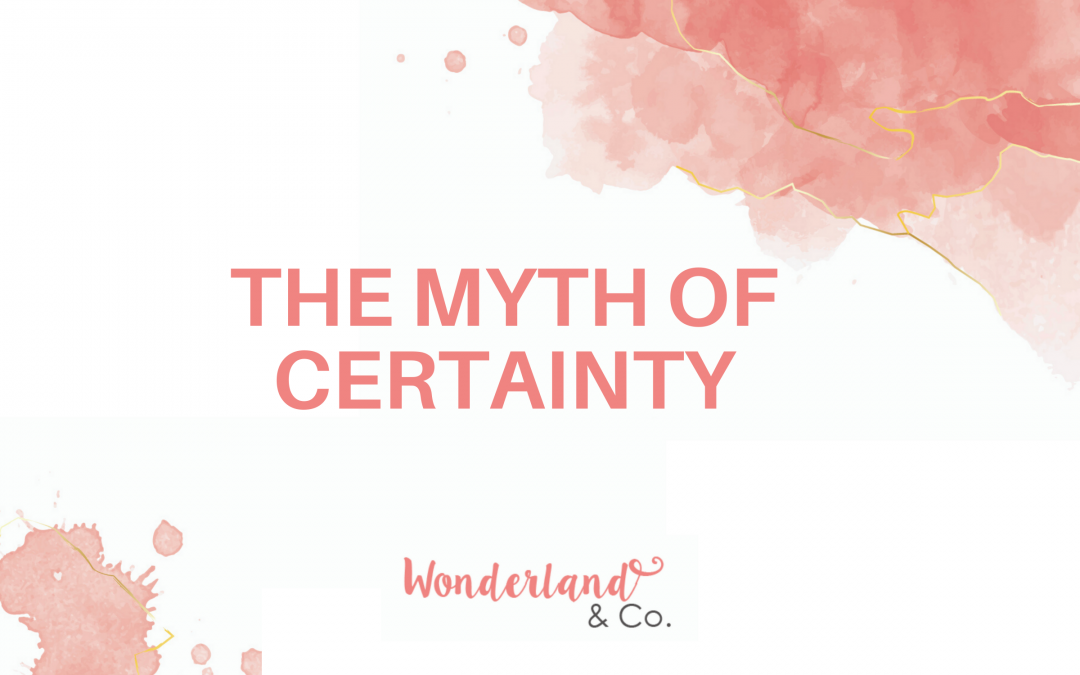 2020. It feels a bit like we’re bobbing in the ocean, and the waves are coming in too hard and fast to find the bottom, or to catch our breath before we’re ducking beneath the next set. I know I’ve written about this before, but I feel like I could use a refresher.

In general, I think that attributing morality and the random happenings of the world to the human-made, time-tracking system we call “The Calendar” is silly. A year is neither good nor bad unto itself. It just is what it is. Twelve months of time in which some things have happened and some things haven’t that we either wanted or did not want to experience. It’s not the Year’s fault.

And also, I will admit that this year is a real humdinger of a rotation around the sun thus far. It is somewhat mind-boggling and also less exciting to be in the midst of history being made, it turns out, than it is to read about it after the fact from a comfortable armchair, cushioned by the distance of time.

This year has been a lot to handle, and we’re only half-way through. I hope you’ve stretched.

I don’t know about you, but even as I read about the mysterious new virus making its grand debut in China back in January, it never occurred to me that in a mere matter of weeks, we’d find ourselves where we did: quarantined, rationing food (despite the assurances that there are no food shortages) and collectively losing our minds in isolation. I don’t know that we could’ve foreseen the chain of events that have led to to social, political and racial unrest we’re witnessing and experiencing. I don’t think anyone could have predicted the impacts and implications of the series of events this year has up its sleeves.

I say “perceived” because, actually, nothing has changed. We never actually knew what was going to happen, but we dreamed our dreams and made our schemes as if we could see the future, which is one of the adorable ways we humans still believe in magic.

One of the hardest lessons this year is teaching us is that certainty is a myth, and it always was. That egocentric belief that we could foresee how it would all go, and how long things would take.

Certainty always has been a fairytale, and on some level, maybe individually, we knew it, but feeling like that we can dream our dreams and plan our schemes has always given us some sense of agency and control, even if Life itself had other plans. Sure, there might be a wrench thrown in the works, or an unexpected plot twist or three along the way, but they were random occurrences and we could brush them off, and call them “luck” or “misfortune” as we saw fit.

The reality is that what we knew to be certain never actually was, but we had ourselves mostly convinced we knew how things would go and that provided us some comfort in the face of the ‘slings and arrows of outrageous fortune.’

Yes, our plans have been put on hold, but only some of them, and largely anything that involved travel or large congregations of people. I’m not saying that’s an easy pill to swallow: I am sad about the postponing and cancelling of some of the adventures we had planned. I know people have missed weddings and graduations, funerals and births. These things are hard.

But to toss out a whole year, part-way through, throwing up our hands with a beleaguered, “What’s the point of making plans anyway? We have no way of knowing how this is going to go, or how long it will take to pass,” would be a blunder.

We never did know what was going to happen, or how long things would take. We just thought we did.

Everything else is still up for grabs. You’re still here and you still have some time, like you always did. That trip you had planned for this summer or fall? The timeline has just been bumped out further than you thought. That career change, or side project? Still do-able. This time is an opportunity to practice making plans and then changing them as circumstances dictate, which is actually how you get good at both making plans and also turning them into reality.

This is actually how plans work. We make them, and they fairly immediately become obsolete and inaccurate, so we have to pivot and iterate. We never really know how it’s going to go. It’s like sailing: your bowsprit is rarely actually pointing in a straight line towards your destination, because you have to trim your sails according to the winds you are given, not the winds you want. At any given moment, it may appear like you’re sailing off course, but overall, you’re moving in the right direction.

As Eisenhower said, “In preparing for battle I have always found that plans are useless, but planning is indispensable.”

It’s not the plan itself that is valuable, it is the time spent creating a plan, and recreate it, over and over, that gives us direction and keeps us inspired in our destination. It keeps us focused on our goals, and creative in the question of how to do it.

This year hasn’t robbed us of our ability to make plans; it has provided us with the opportunity to practice making and remaking them. It has reminded us that none of this is promised: Time or Circumstance. It has given us a rare moment to take a look at our lives, and our world, and check in to see if it’s all moving towards the future we actually desire, and if not, then to adjust our course accordingly.

I’m beginning to suspect that I may not live to see the future I dream of seeing. I suppose that could discourage me (it does), and tempt me to give up (it doesn’t). I’m still going to try. I’ll continue to make my plans and do my part. Because what is certain is that I have some time, and it will be less than I wish I could have. There is no time to waste.

You can surrender your dreams schemes and plans if you like, but you don’t have to.

Certainty was always a myth. Now we just know it. Now, we get to choose what we will do with what we are given, and now we can get to work, making this world better, for all of us.