How to Stop Getting What You Don’t Want 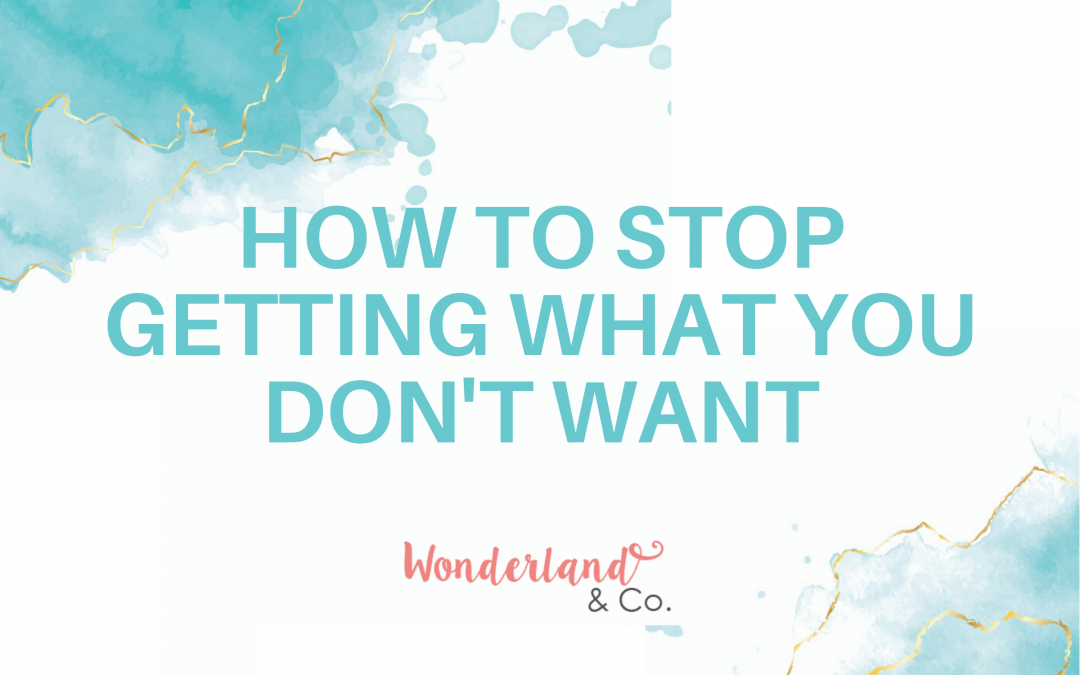 It sounds like semantics, but it’s a real thing. We tend to end up where we focus our attention. When you’re driving a car, and there’s a ditch on the side of the road, you’ll end up driving into it if you keep staring at it, even if the ditch is what you were hoping to avoid.

This is called Target Fixation, and it’s an attentional phenomenon (oooh, fancy science words!) in which you get so focused on the thing you’re looking at that you inadvertently veer towards it and increase your risk of colliding with it.

This is obviously awesome if you’re on a collision path with success or the sexy person of your dreams. It probably goes without saying that it’s a whole lot less appealing if it’s a hazard or obstacle with which you collide instead.

How often have you noticed your attention be pulled to something happening over on the side of the road, only to look back at the road in front of you and realize you are veering over to where you were looking? There’s that quick rush of adrenaline, an “oh shit,” and you quickly correct your steering wheel.

The same goes for riding a horse. This is because the horse can sense your attention is being pulled, and responds to the subtle ways your body has shifted, whether or not that’s the direction you actually want to be heading.

What you want and what you do not want are not the same things. That might seem obvious, but how often do you find yourself stuck in a circular conversation, listing off the things you don’t want and getting not a whole lot clearer on what it is you actually do want?

There’s nothing wrong with knowing what you don’t want. Everyone has preferences about just about everything. I, for example, don’t like kiwi fruit (gross) and there are people who don’t like dogs (what?). The planet keeps spinning and we can all still mostly get along.

Sometimes, it’s helpful to know what we don’t want, in order to help us clear the clutter and see what it is we really do want. Mulling over all the options and sorting them into “want” and “don’t want” can be a process of clarification.

The wheels get stuck, though, if we only get clear on what we don’t want. If that’s all we’re consciously present to, then that’s what we’ll get. We’re just surrounding ourselves with ditches, and then being surprised when we land in one.

I’ve noticed that a lot of people tend to answer the question “What do you want?” with a list of things they know they don’t want. If I wanted to know what you didn’t want, though, I probably would have asked that question, instead.

Imagine if we were going to dinner together, and you asked what I wanted to eat, but I didn’t really know what I was feeling, food-wise. So, to be helpful, you start offering up options.

“How about Italian?” you get excited about focaccia (who doesn’t?).

“No, I had that yesterday.” I frown and look to my left, as if that’s where my preferences lie.

“Mexican? Wait, I know—what about tacos? You love tacos!” Now you’re getting excited, too, because TACOS.

“Ugh. Too messy,” I reply, frowning. Your taco dream shatters.

If this conversation continues in the same vein, while we might be getting closer to choosing a restaurant in the long run, it would be frustrating. If all I did was bat away every suggestion, without ever offering up any ideas, we’d both wind up hungry and annoyed and then we’d be hangry and we all know nothing good comes from hanger.

Knowing what you don’t want is one way of getting clear on what you do want, but it’s a pretty passive way of getting there. If you’re really into the process of elimination, which is weird but okay, and you’re willing to follow it through the end, when you’ve whittled down the options to leave you with a clear idea of what you do want, then that’s great. Most of the time, though, we get pretty lazy and just stick with what we don’t want, and then we’re surprised when that’s exactly what we get.

Not being able to state your desires is not actually an ability thing; it’s a willingness and courageous thing. It’s risky to put your heart out there on your sleeve, and express your preferences and desires. What might people think? Does it make you selfish? What if you want the wrong thing? What if you don’t get it?

Oh, but what if you do? All it takes is practice. Every time you catch yourself stating what you don’t want, see if you can match it with something you do want, as well. Take a moment before answering a question, and see if you can articulate a desire or positive preference. Trust me: this is a muscle worth growing.

Here’s the thing: you’re going to move in the direction of wherever you put your attention, whether that’s what you want or what you don’t want. So it seems to me like a pretty good idea to stop staring at all the potential potholes and ditches, and instead lift your eyes to the road ahead of you, instead.