How to Stop Being a Failure 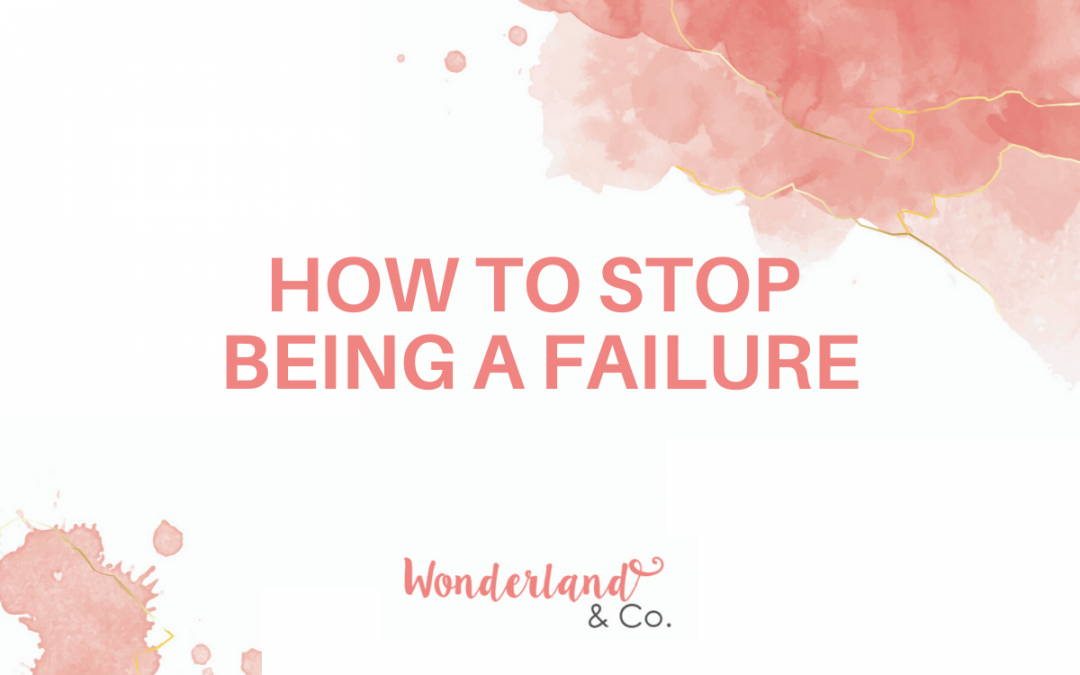 E.B. White said, “I get up every morning determined to both change the world and have one hell of a good time. Sometimes this makes planning my day difficult.”

I can 100 percent relate, E.B. I imagine he found mornings a bit of a trial, given his duelling objectives. He was born in 1899, though, so at least he never had to deal with emails and the Internet sucking his intentions out before his first cup of coffee (did they have coffee 100 years ago?).

I, too, have a special skill for ruining my day before it even begins, or at least trying pretty damn hard to, before 7 am. It would almost be impressive if it weren’t mostly depressive, instead.

How do I achieve such majestic standards before the sun is fully up? Well, mostly by obliterating my tried-and-true beautiful morning routine, which means I don’t do the things that I know make me a happier human being, and then I run around haphazardly trying—and failing spectacularly—to jam it all in at the last minute, which neither works nor leaves me feeling ready to meet what’s coming.

What a lovely way to start each day, right?

It’s ironic that one of the practices that I often skip but know sets me up for a better day is also a practice that brings me face to face with my own failures and shortcomings. It’s a 5-minute journaling practice called clearing (I learned this exercise from Accomplishment Coaching), and it’s a quick brain dump of all the crap floating around my thoughts, of which there is PLENTY. Plenty of crap, that is, not just thoughts.

The idea is that rather than pretend those negative thoughts aren’t there—remember, that doesn’t work the way you want it to—we air out our worries and complaints so we can see how flimsy and not true they are.

Once those thoughts are out in the open and not sneaking around the edges of my self-worth, I can ask myself what all this crap means about me. And unsurprisingly, it always means the same old thing: I’m a failure and I’m lazy (which is also failure). It’s never anything more creative.

I know what you’re thinking: fears, complaints, judgments and criticism, first thing in the morning? It’s a real breakfast of champions. Here’s the thing, though: that garbage is in my space, whether I choose to acknowledge it or not. And when I acknowledge it, it airs it out and the garbage doesn’t stink so much.

And you know what I’ve learned? If you write down that you’re a failure across multiple channels every single day, you eventually start to wonder if perhaps it’s not entirely true. I started to get curious about my definition of failure and question how helpful it was as a filter for my worth. The answer? Not very.

I mean, I could run 10 kilometres and do a bunch of errands and chores, and still call myself a lazy failure the next morning, so I began to suspect long ago that the word failure is largely meaningless, at least the way my inner critic uses it against me. 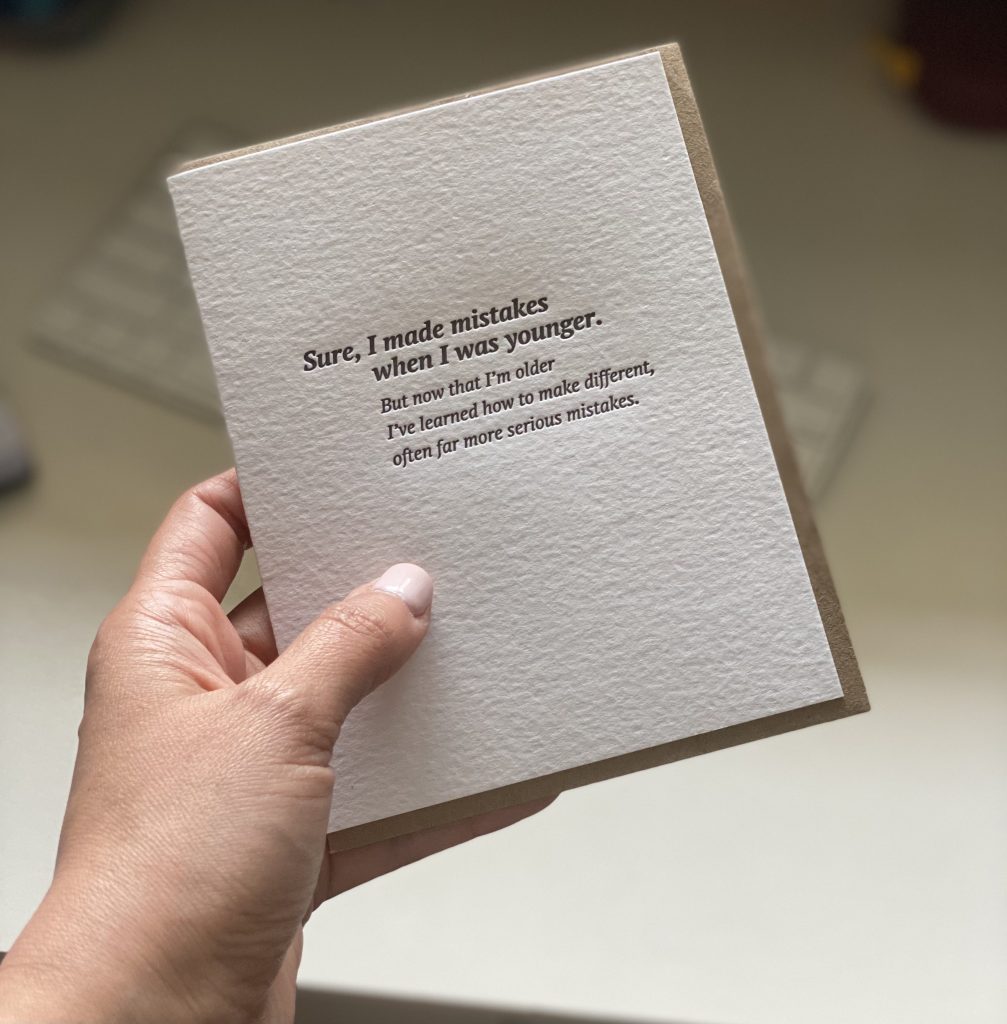 I bought this card for myself. Because #truth.

So how do we put a stop to this vicious cycle of self loathing?

First, we need to understand that our word choices matter, because they are a reflection of our thoughts. Like a good old Freudian slip, the words we use can shine a light on our subconscious conversations—thoughts, feelings and emotions. If you say you’re a failure enough, you’re likely to believe it, and act accordingly, creating a world in which you are a failure. After all, our thoughts tend to dictate our actions and all of it creates our world and our experience of ourselves in it.

This is good news for your Fear, who wants you to stop trying to do anything of any remote importance to you or to the world. Every time you call yourself a failure, or give up after one attempt, your Fear high fives itself and wins.

Ugh. I don’t know about you, but I’m competitive, contrary and stubborn enough to not want someone else to win, especially at my expense.

So then, one way to stop being a failure is to just stop using the word, ever.

Good luck with that.

I personally haven’t had much success with just pretending I don’t feel something that OH I BE FEELING, but then, I do tend to be fairly single-minded and driven. Telling myself not to feel any particular feeling, or think any particular thought has never worked for me. In fact, it tends to work the opposite way; I wind up sinking even further into the sticky mire I’m trying to avoid.

What now? If deleting the word entirely from our lexicon isn’t the solution, then how can we stop feeling like a failure?

Well, you can stop calling yourself one, for starters. Specifically, I mean stop using “failure” as a noun.

“Failure” is not my proper name, and it’s not yours, either. When you do that, you are literally and grammatically classifying yourself by naming yourself as a failure. I’m sure you can think of much better things you’d like to be instead.

What if you could fail at something without being a failure?

See, I am Bay. I sometimes feel like a failure. But that is very different than me saying, “I am Bay and I AM a failure.”

Feelings are not facts, no matter how much evidence we think we have to prove it. Our adorable little brains get all confused when we use language that convinces us otherwise.

If you use “fail” as a verb, on the other hand, then you can not succeed at something without needing to change your name tag to: “Hello I am A Failure.” What a fun networking event that would be.

If you have failed, it doesn’t mean you ARE a failure. It just means you tried something that didn’t work out the first time (or second, or however many attempts you’ve made).

Failure as a noun is a dead end, whereas failing as a verb just means you haven’t found success yet.

That last little word—”yet“—makes all the difference.

After all, failure isn’t final until you’ve given up trying.

And I don’t know about you, but I’m much more likely to keep trying if I haven’t resigned to calling myself names and relating to myself as an abject failure, especially if I have a crappy story about what failing means.

If you want to stop feeling like a failure, start by switching to active language (fail as a verb/what you did) and not name calling (failure as a noun/what you are).

You are more than what you do, regardless of whether you succeed or fail. That you’re willing to try is more important than the result anyway. Trying is the part you have the most control over, and that’s where the magic happens.