How to Make Plans When You Can’t Plan For Anything 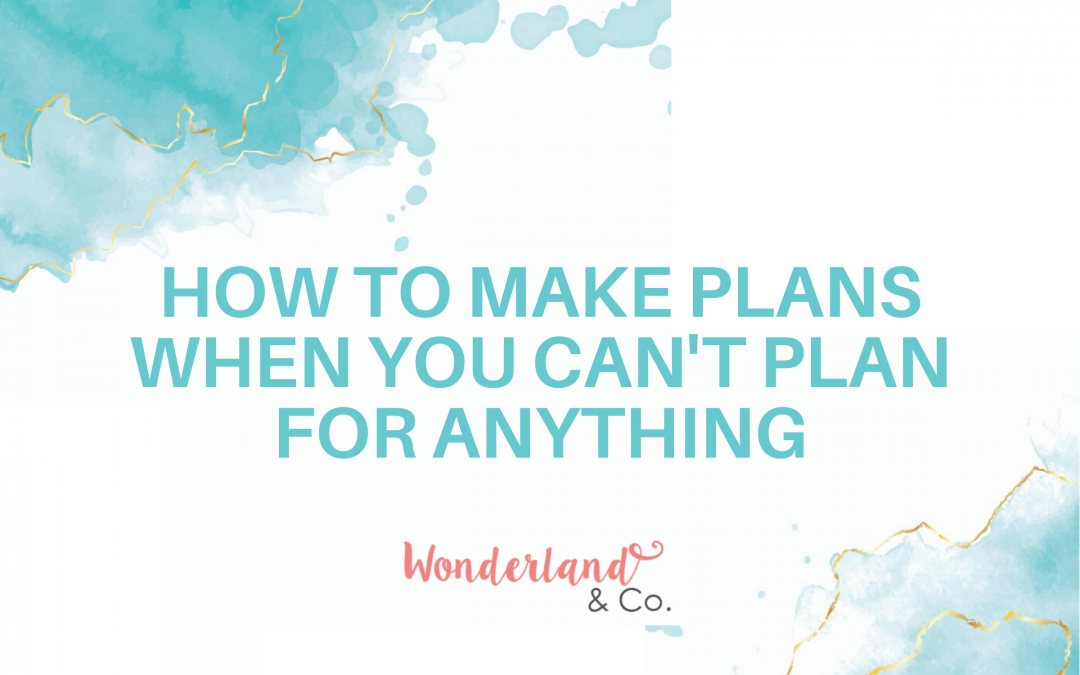 Well. What the hell are we supposed to do now, right?

I don’t know about you, but I remember like a month ago, when I was busy making plans and dreaming up dreams, and going about my life in a predictably predictable pattern.

If you’ve been paying attention, or even if you haven’t, you’ll have noticed that everything is very, very different today than it was a mere few weeks ago.

There are currently a lot of things to feel concerned, anxious and worried about in the world. As someone who has tended to host anxiety all her life, I actually find it somewhat comforting, in a strange way, to know that I’m not the only one worrying about stuff right now. My baseline anxiety doesn’t feel so remarkable these days. Given the cause, though, I wish it weren’t so.

There are losses to reconcile, not the least of which are the many lives lost, and those that will be lost in the coming days, weeks and months, before this pandemic is over. There are the impacts to the economy and people’s livelihoods to consider. The former, I’m glad to see (given that the economy mostly only benefitted a select few), and the latter is extremely difficult to witness and experience.

We are in a cycle of grief and that includes all its stages: denial, anger, bargaining, depression and acceptance. If you’re feeling any of these, in any order, then you’re right where you’re meant to be, along with everyone else right now.

Part of the experience we’re all sharing, I believe, is mourning a version of reality that was never really real, but for the most part tended to buoy us along, generally speaking, as if it were true.

We’re mourning an idea that used to provide us with a lot of solace and peace of mind, even if it was never actually true: we are mourning our ability to have control over the future.

We are mourning our ability to make plans for the foreseeable future.

We are mourning the belief that the future was ever actually foreseeable, period.

If you’re a driven person, this is especially difficult to reconcile. After all, you’ve always made the future happen, haven’t you? If it was difficult, you just tried harder. There has always been a way forward.

Until now, it seems.

Now, there are many people for whom this has never really been a luxury, given the part of the world in which they live, due to conflict and war, political unrest, and mass poverty. I don’t mean to step over the privilege that, just like our belief in a predictable future, has been largely taken for granted. It just isn’t the main gist of this post.

For most of us, Life has been mostly predictable, give or take, despite the odd bump along the way. For example, I didn’t plan to break my foot last year at the very beginning of a three-week, three-country tour of Europe, but it happened, and it changed a great many aspects of that trip, and my life, for the six months that followed it.

We’ve all had experiences that bumped us up against the belief that we get to say how this will all go. We’ve lost a loved one, fallen sick or gotten injured, and it has smacked us up against the glass ceiling of our delusion of ‘life as we know it.’

Right now, collectively, we’re feeling the jarring discord of seeing that we cannot create a plan for our future, even if it was one vacation, or school year, or fiscal quarter at a time. Suddenly, people feel like they can’t make commitments or declarations about the future, because it’s all so uncertain and up in the air.

I get it. Things have changed so quickly. Some things continue to shift rapidly, and other things we wish would change faster are taking their sweet time to come around.

Just to be clear, though, nothing’s really changed when it comes to the uncertainty of the future. I mean, it’s always been uncertain. That’s kind of its thing. The Future, I mean.

Life has always been uncertain. Nothing has ever really been promised. Now, thanks to this rather hefty reminder, we’re just more aware of that uncertainty. And we don’t like it much.

Life may have felt less unpredictable prior to now, but that’s only because we were operating within a fairly constrained set of rules dictating the possibility of what may come by how it had gone before in the past. Before this pandemic upended everything we knew, we were basing our plans on what we were pretty sure would happen, given what had always happened before now.

But, the fact is that we never know when or if we might fall ill, or suffer an injury, or lose a loved one, or, or, or…

We just thought that we knew. As the infamously mis-attributed Buddha quote states, “The trouble is, you think you have time.”

We only thought we knew how things would go. Things still went the way they did, regardless of our wishing or scheming otherwise, but we could reconcile those discrepancies on a smaller, more personal scale. Now, we’re seeing it on a universal scale, and it’s profoundly unsettling.

We are feeling unsettled.

That all makes sense. This is an unsettling time.

So, what on earth are we meant to do from here? How do we make plans for a future that is uncertain?

The answer is the same as it always was: you make plans, and then you alter those plans along the way. That, my dear ones, is Life. It’s how Life has always gone.

Just like always, we can make plans right now. Perhaps, though, we’re having the moment of clarity that brings with it the humility to make those plans in pencil, not pen. We are not the creators of an indelible story of the future. There are constraints right now that weren’t there a couple of months ago, yes, but there have always been constraints of some kind, and you’ve always navigated them before.

Okay, you say, but even if we make those plans in pencil, how do we move forward from here?

The same way we always have. We make new plans and we revise old ones.

We get clear on the vision for the life we want, and we figure out, by hook or by crook, how to make it happen. Yeah, it’ll take time and effort, but then, it always has. And what else were you planning to do with the indeterminate amount of time you’ve got, otherwise?

Sure, you don’t know how much time you’ll have, but that fact has never changed, even if you weren’t paying close attention to it. It’s the same now as it was before all this began, and the same as it’ll be in the future, whatever that new horizon looks like on the other side of this pandemic.

The one thing that is true is that you have some time. What you’ll do with it is up to you.

So I say, keep dreaming your dreams, and setting your goals. Your plans haven’t become impossible, they just require more creativity, patience and flexibility than you were aware of previously. Those ingredients have always been beneficial, but now they are essential.

If you want to learn how to create plans with more intention, especially when it seems impossible to make plans, be sure to subscribe to my mailing list, so you don’t miss out on how to do impossible things. This is what we do at Wonderland & Co.