How To: Do the Right Thing 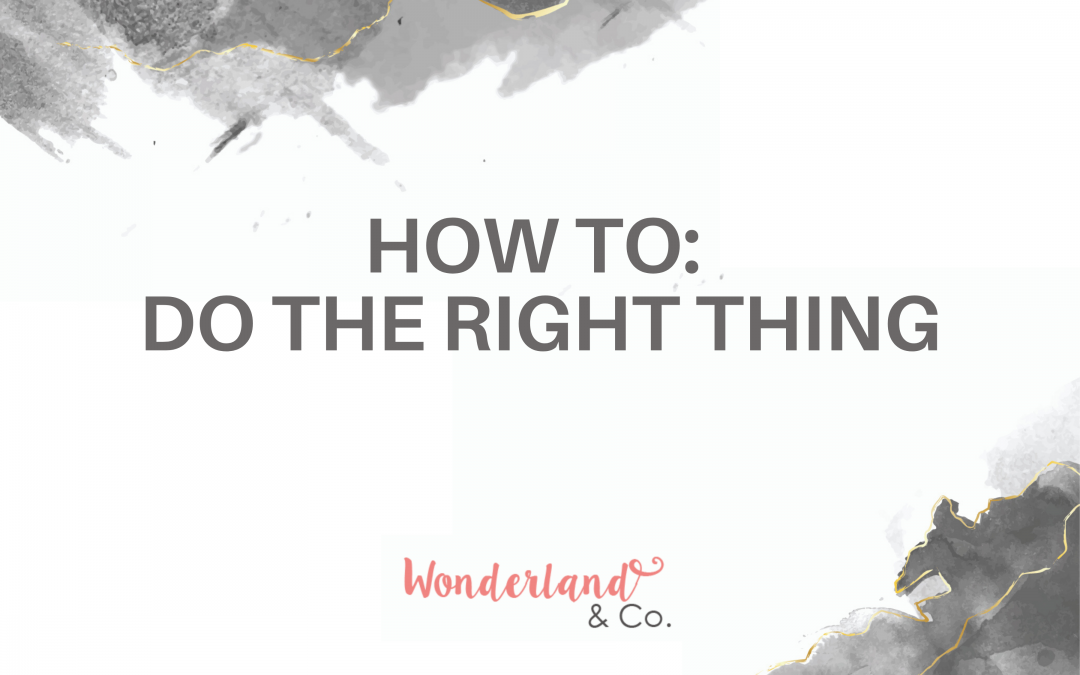 This is it. The article you’ve all been waiting for. The one with all the answers. The proverbial gold at the end of the also-proverbial rainbow.

After reading this post, you may well think I’ve been holding out on you all this time. I promise you I have said this before, but today I’m just making it obvious and explicit for the sake of expediency, since if there’s anything to be learned in a pandemic, it’s that we don’t have time to be diddling around, not moving our lives forward.

When it comes to moving our lives forward, we’ve all heard that all there is to do is “the ne

xt right thing.” Papa Troll even says it to Anna, who sings a whole song about it in Frozen II. If Disney writes a song about it, you know it’s canon. Also, if you haven’t seen Frozen II, what are you waiting for? It’s seriously delightful and deep, all at the same time, and very appropriate for these weird times. Plus, Olaf (the obliviously wise snowman) nails both the humour and the deep philosophical wisdom at the same time. Plus, it’s really pretty.

However, I digress. Frequently.

There’s this great quote by Elizabeth Elliot: “When you don’t know what to do next, just do the next thing in front of you.”

So, cool, right? All we have do is the next thing? SWEEEET. That seems doable.

Real quick question though: how do we know what next thing is the right one?

See, here is where it all falls apart. Countless dreams and cunning plans, all stopped in their tracks by this little conundrum. What is the right thing to do? Because—let’s face it—that’s the only thing we want to be doing. As we’ve already covered, when we say the “next right thing”, what we mean is “what’s the next right thing to do that will for sure work and definitely not not work?”

Guilt (“I did something wrong”) and Shame (“I am wrong”) creep in when we fall into this line of thinking, and we do like to avoid those at all costs. So, instead of risking it, we’ll just sit here and do nothing, waiting until we’re sure that the thing we’re going to do is The Right Thing To Do.

First of all, what’s right and what’s wrong? Well, that’s entirely up to you. Right and wrong are just decisions we make after the fact, so that we can judge ourselves accordingly. We get so hung up on that judgment that we become paralyzed in our pursuits.

So, if you took any action, it was the right thing to do. Whether or not it worked is a completely different conversation.

Wanna try an experiment? Try swapping out “that worked” for “right” and “that didn’t work” for “wrong” and see if it makes a difference to how you feel about your attempts to do things and your willingness to take new action, and about yourself, too. Who knows? It might be interesting to test out something new…

Okay, so one way to know how to do the right thing is to just do things, for crying out loud, and then do more things, afterwards, without all the psychological evaluation of our worth as human beings hingeing on the outcomes of each piddly little step. Phewf.

Next, you want to make sure that the next thing in line to do (when you don’t know what to do, as per E. Elliot’s sage advice) is actually something that is related to what it is that you’re trying to accomplish. There’s always a risk that when you’re not sure of your next step, and look to the next thing in front of you, that what seems like the next thing might well be a distraction.

This is because the more you want to create something, the more fear it drives up, and the riskier it feels to move forward. This is totally normal. It is also very uncomfortable, and we don’t much like being uncomfortable. So, when we look around for the next right thing to do, we’ll do almost anything else, for anyone else, first. Maybe it’ll be for work, or putting your kids’ dreams first. Maybe it’ll be taking care of aging parents. Maybe it’ll just be getting the next promotion, or losing that weight, or cleaning your garage, or… Maybe it’ll be all of it.

It doesn’t really matter what the distraction is, if whatever becomes the next thing in front of you isn’t directly in service of creating the thing you’ve been wanting to create.

This is why it’s so important to make a plan, starting out in the future with the vision of what you want to create, and then work it backwards, to where you are. That way, when you don’t know what to do, and you look around for the next thing in front of you, you’ll be choosing from options that are in service of the goal you’re trying to achieve.

If you want help figuring out the next right things to do, try giving up being afraid of “wrong” and get clear on the things it would actually take to move your life forward. Make a damn plan. With many steps, a.k.a. Next Things In Front of You.

What’s something that you want to move forward? And what has been getting in the way? Join The Life Intentional and get busy doing all the next right things. It’ll be fun, it’ll work, and it’ll cost you around $200 a month to actually create your life. That’s what we do there.