How to Feel Safer When Life Feels Insecure 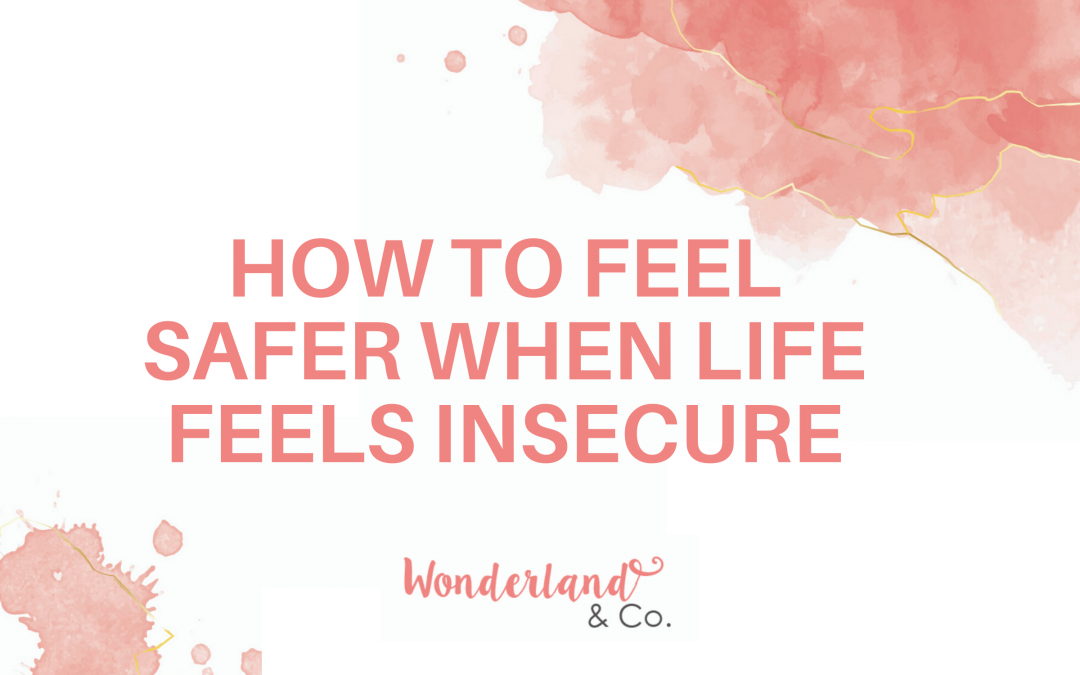 As a writer, I tend to pay pretty close attention to the words we use, and the ways in which we use them. Whenever I hear a word that doesn’t match the context in which it was said, the voice of Inigo Montoya whispers, “You keep using that word. I do not think it means what you think it means.” Using the right word in the right way is important. Even The Princess Bride says so, and that movie is never wrong.

Lately, I’ve noticed people talking about their safety, especially when it comes to participating in group interactions. Specifically, I’m hearing people saying that they don’t feel safe to share or to engage within the container of the group that they’re in, or that they shared something and then didn’t feel safe after the fact.

First off, it just makes sense to me that people are a bit edgier than normal right now, because we’re all out of our comfort zones with regards to this pandemic. We’re worried about health and safety, and our loved ones, and the economy, and, and, and… It’s like we’re watching a scary movie and jumping at every sound in the house. Fear is contagious that way.

I became really curious about this idea that people weren’t feeling safe in places that seemed pretty darn safe to me. Something just didn’t seem to add up. Did these people genuinely fear that their safety was potentially being threatened, or was something else going on?

I have thought long and hard about this conundrum and here is what I’ve got:

It seems we are struggling to differentiate between compromised safety and plain old discomfort. I’d guess that our inability to distinguish safety from comfort sort of implies that we’re mostly experiencing discomfort, because if our safety were really on the line, we would be in trouble, and most of the time, we aren’t.

We often find ourselves in uncomfortable situations in life. A new job, a first date, the first day of school, et cetera. When we don’t know our surroundings, we feel a little shaky and uncomfortable. We’re nervous—what’s going to happen? We feel fear creep into our bellies, we feel our chests tightening, and we might even start to sweat. These are normal fear reactions in the face of uncertainty.

The fact that we are feeling fear doesn’t necessarily imply that we are in danger, or that we are unsafe. Feeling unsafe is not the same as being in danger. But your fear can’t tell the difference, and if you aren’t consciously able to discern between the two, neither will you.

This is because your thoughts and words are connected, and your body responds to your thoughts. You are, in fact, the boss of you. So, if you keep insisting that you’re unsafe, your mind and body will have no choice but to agree with you. You are literally convincing yourself that your safety is in question, when it probably really isn’t, at least not critically and urgently. If your safety was critically and urgently being threatened, you need to call 911, not sit and talk about it and reach a consensus about your feelings about it.

Sure, in a new environment, learning new things with new people, you might even be experiencing fear, but that makes sense: putting your hand up to speak is the modern-day equivalent of peeking your head up above the parapet of a castle. In those days, doing so might land you an arrow to the face, so the fear was pretty understandable. Today, you’re risking embarrassment or looking like you don’t know all the answers (spoiler alert: you don’t), but that won’t kill you (I promise).

Nowadays, it’s highly unlikely that you sticking your neck out is going to result in your head being chopped off, but that doesn’t stop your fear from yelling at you, trying to convince you that your safety is on the line. Fear will say anything to get you to sit back down, shut up and not do anything that will bump you up against the edges of your comfort zone, let alone go galloping off past its boundaries into the great unknown (The Unknown = Where All Possibility Awaits).

So, how can we feel safe when life feels scary? Easy. Stop using the word “unsafe” when you mean “uncomfortable”.

In order to do this, you need to learn to distinguish danger from discomfort, because until you separate them, you’re going to keep using the wrong word, which means that you will continue to have a fear-based response to discomfort.

We need to understand how fear works. And this starts with understanding that your fear doesn’t have to make sense at all. Fear is under no obligation to be sensible. That is not its job.

Fear’s job is to keep you safe, and it’s also the least-evolved part of our brains: the amygdala. It sees someone questioning you as a saber-toothed tiger, and reacts accordingly. That is to say, it overreacts.

Your fear is one jumpy little rabbit. So is mine.

Because of this, sometimes, fear can be misplaced. When that happens, it will show up in places where it’s not all that relevant, but our brains, in a bid to be helpful, will make up REASONS! for our fear to be there, rationalizing it so that we don’t feel like we’re insane. And then—get this—we believe those reasons. Oh, us.

For example, it’s like saying you don’t feel safe, in a virtual group meeting, for which you signed up to learn something new, and to grow and be a part of something different, from the comfort of your home or office. You’re not unsafe. How could you be? Is your physical well-being at risk of being jeopardized? Is there a bear or an assassin in the room with you? Probably not, though with an assassin, you likely wouldn’t know until it’s too late… but you get the idea.

If we understand how fear works, we can stop letting it have free rein over us, and instead save its dominion for the moments that we really need it (actual bears, assassins, etc).

You may, however, be uncomfortable. You might be learning something new, or speaking up in a meeting, or in some way risking your emotional equilibrium being knocked off-kilter. Discomfort is uncomfortable (it’s right there in the name, after all), and that might make you nervous, but it doesn’t mean you’re at risk of harm.

You’re a grown adult, and your survival rate is so far pretty damn stellar. Yes, safety is relative, for sure, but most of us reading this are probably privileged to live in relatively safe environments, with most of our wants handled, let alone our needs. There are many other people who are not so fortunate.

Deciding what to do about being uncomfortable is different than deciding what to do about being in a situation in which you are unsafe. For starters, you have more options, space and time when it comes to dealing with discomfort, because it’s not as urgent as dealing with your safety, which tends to be more emergency based. Panic rarely provides us with plentiful and well-thought-out alternatives.

If you want to feel safer, take a look around yourself, and have a grown-up conversation with the part of you that is insisting that you are in imminent danger, and find out if that is factually true. Reassure yourself, just like you would reassure a child who feels scared by ensuring them that you will keep them safe, not by telling them the world is scary and dangerous and they should freak out.

Let me be clear: I’m not saying that emotional safety isn’t important. Certainly, there are bullies and trolls and people who can and will aim to do harm to you, not physically, but psychologically. Are those the people that you signed up to work with, or alongside, or learn from? I sincerely doubt it; you are more discerning than that in choosing your people and your places. If you assume they’re assholes waiting to take you down, or that you don’t have dominion over your thoughts, or that your emotions and self-preservation are fragile, then you will likely feel fragile, defensive and in need of protection.

Fragile things need protecting. You don’t. You are stronger and more resilient than your fear is trying to sell you on.

If you assume positive intent, you will feel stronger than if you assume harmful intent. The former relieves you of managing your fear and how other people show up (p.s. you can’t manage them anyway), the latter requires constant vigilance. Constant vigilance is required when we are under constant threat. No wonder we feel unsafe.

It’s up to use to manage our fear, or else we run the risk of being managed by it. Being managed by our fear makes us paranoid, sensing danger where there is none.

Calibrate your emotional and psychological experience by questioning your thoughts and feelings, instead of unquestioningly believing them and then reacting to them.

In short, if you want to feel safe, stop telling yourself that you aren’t.

There are enough reasons to be afraid in this life. We don’t need to create more.