How to Avoid a Lifetime of Regret 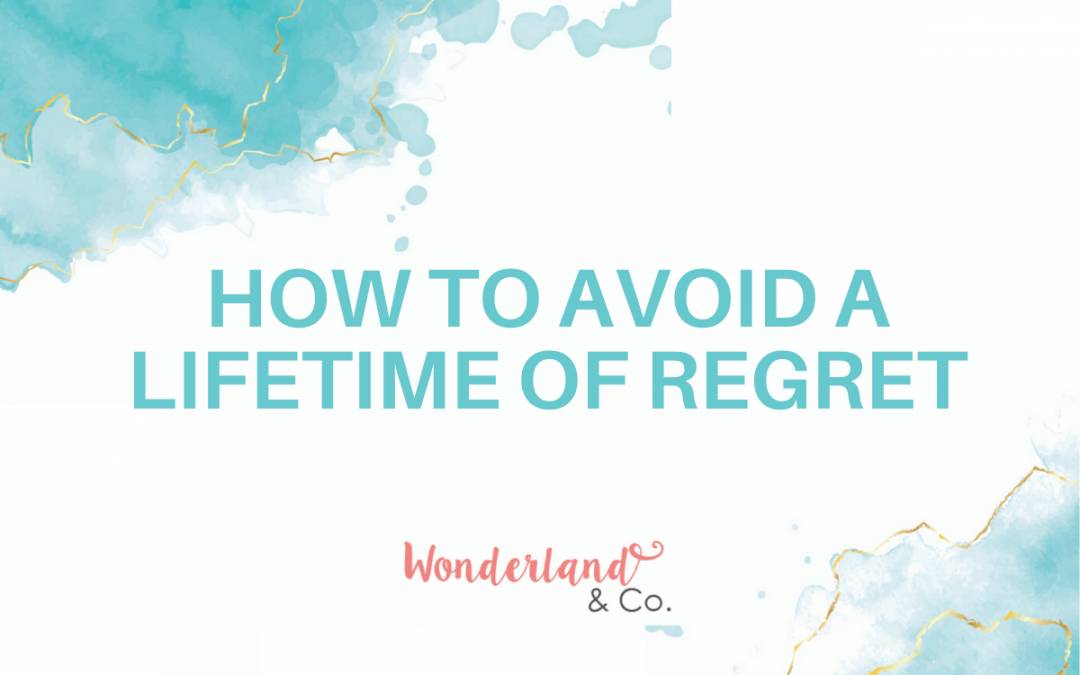 Have you ever experienced regret?

Not just about falling for a then-trendy-but-now-what-was-I-thinking hairstyle, body piercing or unflattering pair of jeans, though, we’ve all been there.

Junior high (aka The Nineties, in my case) was an awkward time for everyone and hindsight is a ruthless critic. Though apparently it’s all coming back now, which is mind-boggling to me, as I’m suspecting the fashion cycle has probably boggled the mind of every 40-plus-year-old for all of time.

So, not that kind of regret, but the kind that eats at you/your soul, casting doubt over your past decisions, leaving you holding out hope for a different past while simultaneously living in the wreckage of your future.

Who says we can’t be in two places at once? If you know regret, then you’ve straddled the past and future, though at the expense of the present and your ability to be present for it.

That kind of regret makes it hard to let go of how things went, and what you did or did not do, and any judgment that accompanies it.

I bet you know the “right” answer is to say you don’t waste time on regret. That would be very smart and enlightened of you, if only it were really true. You know, because avoiding a feeling is not actually the same as not having the feeling at all…

The truth is that life is too precious to spend much time wasted on regret, in my opinion, but sometimes, it’s hard not to look over our shoulders and see how the decisions we made then might have gone differently if only we knew then what we know now.

I feel fortunate that I tend to make decisions pretty quickly—I know lots of people who really struggle to make a big life change or order dinner off a menu—but that doesn’t mean I don’t have some regrets. Even though I wouldn’t change anything that led me to this wonderful life I’ve created, I do sometimes wish I could go back and add to my experiences.

If I had a time-turner, I would take my mom’s advice after my heart was broken and call my best friend Jennifer back in the spring of 2000 to tell her I was dropping my summer job and using my student loans to fly out and join her for a summer of travel and working abroad in the UK and Europe. Oooh I want that past.

I didn’t go because I believed I needed the summer job to pay for my tuition, so that I could avoid using my student loans and getting into debt. In reality, I didn’t believe I could just fly off and have an adventure, because it wasn’t responsible or realistic for someone like me (a person who was poor and had to work all the time).

So I stayed home and missed out. And eight years later, when I told Jennifer that I wished I’d gone on that adventure, she told me how much she wished I had joined her.

Oh, and those student loans? I ended up burning through them and getting into debt anyway, without the growth, adventure and experience of traveling abroad for an extended period of time. It would take me over a decade to pay it off. Go figure.

I mean that kind of regret. What’s yours? What would you go back and change if only you could?

And how do you avoid feeling the bitter sting of that kind of regret in life?

One way to avoid regret is to make increasingly smaller decisions, or better yet, avoid making decisions at all. This way, you never have to risk making the wrong choice. It works, but I don’t know if you really want it to…

See, there’s one little problem: Time keeps on marching forward, and not choosing is still a decision. It’s just a decision that leaves you feeling like you’re missing out (because you are) and like you’re a victim, because you’re playing not to lose, instead of playing to win.

So, if you really want to avoid regret, you’re going to need to figure out how to avoid making the wrong decisions.

How do you do that, you ask? No prob. Easy. You can avoid regret and making wrong choices by exclusively making the right choices.

I’m not pulling your leg here. If you want to know how to make the right choice, you need to understand that your decisions are neither inherently right nor wrong.

Whether a decision is the right one or the wrong one is simply a choice you’ll make after the fact. A belief. A story. It’s all made up.

If you don’t like the story you’re telling yourself, then tell yourself a better one.

My suggestion would be to get into the practice of calling your decisions the right ones, and then moving on to the next one.

If you absolutely MUST label your decision as wrong, then maybe see what there was to learn from the experiment, and then forgive yourself and move on to the next one.

Your life will be full of menus, options, choices and decisions. Get into the habit of empowering the choices you make, rather than making yourself wrong for them, and then moving on to the next decision in front of you.

If you can’t really make the wrong decision, you may just find that there’s a whole lot less to regret in life.

By the way, the next time Jennifer asked me to meet her abroad, you can be damn sure I said yes, and that trip to France tipped me forward into a whole life of possibility and experiences and yes-to-adventure and why the heck not.

If you have regret that propels you forward, because you learned the lesson, then great. But if you’re mired in regret, paralyzed by the fear of making the wrong choice, maybe that’s the thing to shift.

Life is short. Don’t waste it on regret that doesn’t fuel you towards the life you want to be living.

Make right choices by letting go of the idea that you can do your life wrong.