How to Keep Going After You’ve Given Up 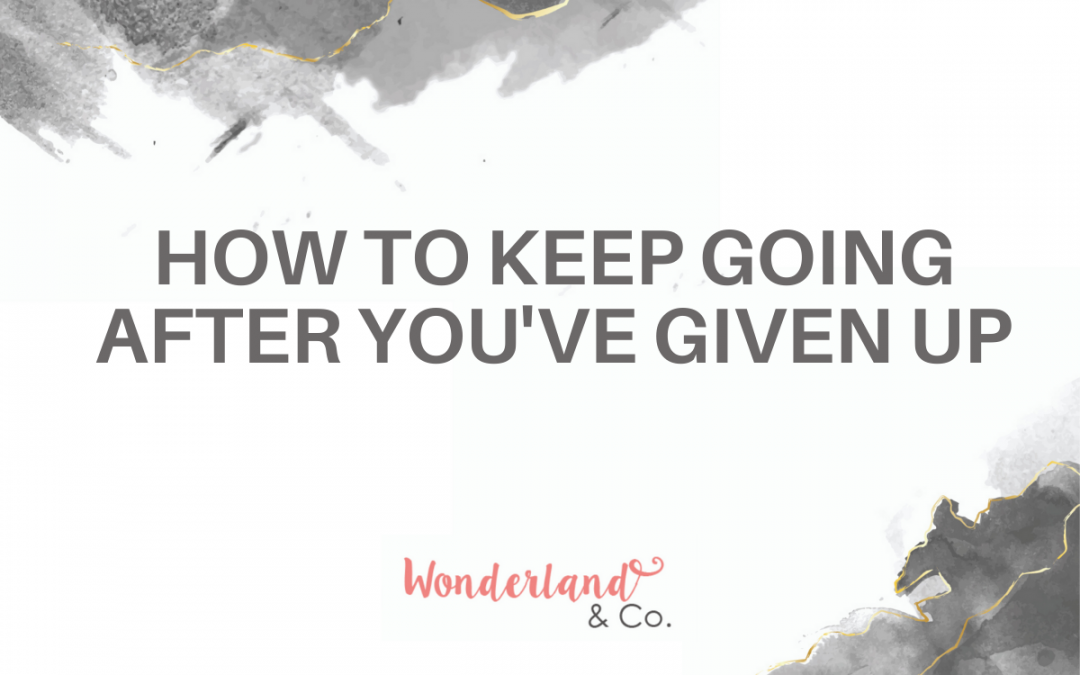 Can you believe we’re 3 weeks into January? This means we’ve passed Quitter’s Day. Did you celebrate? Does one celebrate a day that marks the expiration of goals and intentions? I have so many questions…

Generally speaking, Quitter’s Day takes place on the second Friday of January. Not everyone knows about it, but then, it’s hardly a date you’d eagerly write on your brand-new planner.

This is the day by which most people who’ve created a New Year’s resolution give up on it. Now, as weird, judgmental and argumentative as we like to get about New Year’s resolutions, this just means that within two weeks, we tend to surrender our intentions for any sort of goal or change we’re trying to make, with a big old sigh and “screw it.”

Years ago, Strava noticed that of the 800 million people who use their gadgets and apps to track their fitness, some 80 percent of people who take up a new fitness habit tend to drop off by the second week of January. Hence, Quitter’s Day.

That this happens in mid-January isn’t really very special; people tend to give up the gusto on change within 2 weeks of whenever they decide to embark on any new structure, routine or habit. In January, though, people have long tried to harness the excitement they feel at the prospect of a new year—”EVERYTHING WILL BE SO DIFFERENT NOW!”—so goals and resolutions tend to abound.

Interestingly, the third Monday of January is also given a name: Blue Monday. Apparently this was named after a travel company used an “equation” that relied largely on weather patterns in the Northern Hemisphere to determine the most depressing day of the year. Another day not to mark on your calendar.

Now, apart from the fact that Blue Monday is largely considered pseudoscience, I’m not surprised that people tend to feel bummed three days after giving up on their intentions. I mean, if I have gotten up the motivation to try to work on a desire, and it all falls flat, I’m likely going to feel disappointed. I’d be disappointed it didn’t work and also likely disappointed in myself for failing, leading to all-too-familiar negative thoughts and judgments about me that land me in a crappy pit of despair. This pit is not where joy and inspiration are found.

It’s a perfect recipe for feeling depressed. Like we want that recipe in our favourites folder.

But what if it didn’t have to go this way? (Spoiler alert: it doesn’t.)

If you don’t want Quitter’s Day to be roughly two weeks after every goal you set, and Blue Monday hot on its heels approximately three days after that, then read on.

By the way, this is not rocket science. You already know what is needed. This is a refresher course in how to make things happen.

Here’s how to make your goals easier to win than to lose:

My favourite rule of grace for any daily habit is: You can miss one day, but you can’t miss two. What rules would have you feel like you can breathe and still win? I use TEENY TINY habits to create change, which is why I can take them on daily.

We all know I’m a big fan of goals and dreams and intentions. I know change is hard, but I also know we’re capable of creating the changes we want, and when we set ourselves up to win, we get what we want and we get to have fun at the same time.

Quitter’s Day and Blue Monday are not official holidays and they don’t need to be on your calendar. What’s one tiny thing you’d like to win at? And how will you make it easier to win than to lose?