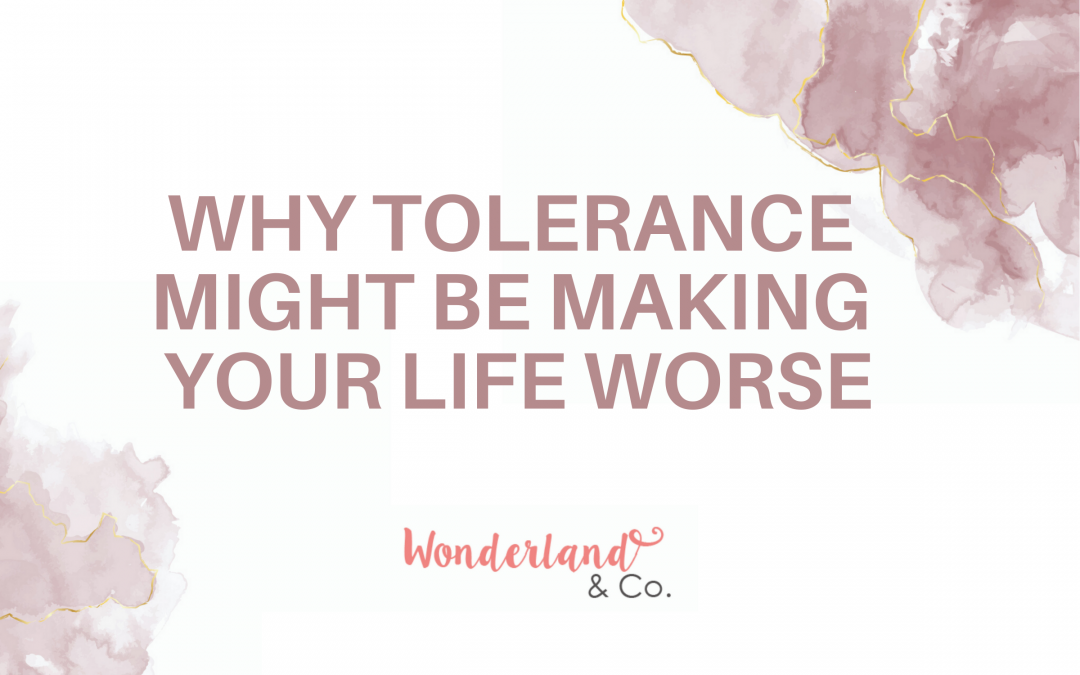 Well, if this year has taught us anything—and I think it’s taught us a lot, whether we wanted to learn the lessons or not—it’s shown us where the boundaries of our tolerance lay, and that those are fairly stretchy lines.

Obviously (I hope), the ability to exercise tolerance is a quality that makes being alive amongst billions of other people a little easier to manage without losing our individual or collective minds. Tolerance of humanity—ours, theirs—is essential in creating harmony.

But too much tolerance, and bam! We’re a doormat. Maybe an angry and resentful doormat, but a doormat all the same.

Excessive tolerance is not a virtue. It’s a lack of boundaries, or at least a lack of willingness to stand for them. And, as the saying goes, if you won’t stand for something, you’ll fall for anything.

Tolerating unacceptable or undesirable behaviour from others means you’ll be on the receiving end of more of it.

What you allow will continue.

This also means that whatever you tolerate from yourself, or in your world, or even your personal corner of it, will continue to be present.

For example, if you hate clutter, or it causes anxiety, but you leave that pile of stuff on your desk, or on the floor beside it (why, yes, I AM talking about myself), you’ve not only grown tolerant of the mess, but also of the feelings of anxiety and discord it produces in you.

Perhaps you’ve grown to tolerate making your work unpleasant, even if it’s work you love and find fulfilling. Maybe you have learned to tolerate pushing, striving and grinding yourself down in the name of getting things done.

We can learn to tolerate anxiety and depression, malaise, dissatisfaction and boredom. We can tolerate toxic relationships and even relationships that we know in our hearts just aren’t right for us.

You’ve learned to tolerate not asking for a raise, or asking for a date, or going after your dreams, or, at least—you know—that one dream you keep putting off for someday when, after you’ve…

Our individual and collective willingness to tolerate that which we don’t want, and to accept what we’ve got instead, even if it’s not what we really desire leads to chronic apathy.

This becomes really problematic when our chronic apathy leads us to tolerate things bigger than the conditions of our own lives. We can grow tolerant of broader issues like systemic racism, inequality and discrimination. We can tolerate disparity in wealth and quality of life, and unequal distribution of resources, so some waste needless excess, while yet others starve.

We learn to tolerate these things because the discomfort accumulates slowly, over time. Like the unfortunate frog in the proverbial pot, not noticing the temperature rising, one degree at a time, until it’s too late to do anything about it.

It’s helpful to learn to be with the things that are truly outside of our control. But there is a lot more within our control than our apathetic tolerance would have us believe.

I’m not wishing you were less tolerant because I want you to be bothered, unhappy and miserable about life as it is. I’m not suggesting that you practice being less tolerant and then proceed to do absolutely nothing about it. There is more than enough mediocrity, adequacy and inadequacy in this world already. The world doesn’t need any more of that, thank you very much.

What if you stopped wasting your tolerance on the things you could change, and saved it instead for the parts of life that really require grace and clemency? Let’s raise our expectations and our standards where it makes a difference.

What if you were willing to be bothered enough by the things that are worth going after or changing, to go after and change them?