What No One Tells You About Success 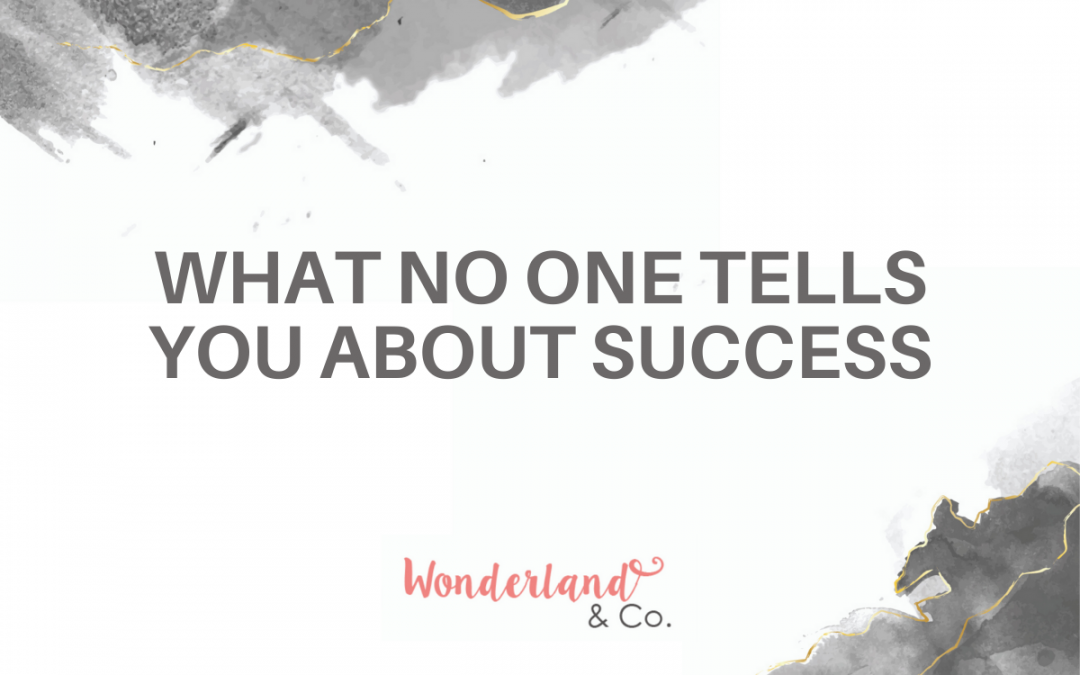 Getting what you want is awesome. Winning is awesome. Succeeding feels amazing. Going after something, giving it a go and seeing your intended results? Awesome, obviously.

We’re so used to being over here on this side of what we want—the side where we don’t yet have the desired results—that a lot of us have a pretty Pollyannaish, rose-coloured-glasses expectation for what it’s like if and when we finally succeed. We’ll be happy and confident and satisfied forever, right? We’ll immediately stop feeling inadequate and never again question our value as a human being, right?

So what actually does happen when you succeed? Apart from the obvious (getting what you wanted), there is the excitement of winning. The sheer thrilling joy of summiting your Everest. The rush of victory and the triumph of succeeding. You’ve done it. You’ve finally done it! Huzzah!

There are the tangible rewards of success: more money, power, position/rank, et cetera. The cars, the watches, the new home, the vacation, the vacation home, the better schools, the whatever-is-your-thing rewards…

With success often comes recognition and acknowledgment, which, whether we admit to it or not, we yearn to receive, even if we feel uncomfortable in the spotlight once it’s upon us (this is me, one hundred percent).

And this is where we start to see the shady discomfort that lies just on the other side of getting what you want. This is the land of problems you would have said then that you’d love to have, only to realize that problems are problems no matter how awesome the reason is for having them.

Here’s the thing: no one wants to hear about the hardship of your successful life when they’d give their left kidney to have your success. At least, that’s how it feels, so you keep it to yourself, along with any feelings of depression or anxiety, which tends to make the darkness fester.

Here’s what no one tells you about success: getting what you want can sometimes leave you feeling a little lost. I’ve talked to multiple Olympic athletes who spoke of the depression, confusion and loneliness on the other side of the podium and a gold medal. Now what? Now that you’ve achieved what once felt impossible, you’re lacking the North Star that has been guiding your way.

With the goal achieved, you might feel a little bereft of purpose, directionless and unsure of the road ahead. You only had a plan to get to here, to where you are now: you don’t know what you’re supposed to do next. You may not know how to channel all the devotion, determination and discipline you’ve relied upon to get to where you are. If you’re used to striving, but suddenly don’t know what you’re striving for, you might feel confused or empty.

What I’ve noticed in myself and in others is that when we get what we want, after the confetti and streamers fade away, we tend to discover a whole new range of things to worry about. We thought that once we got what we wanted, all our fears and worries would disappear and we’d be happy, content, satisfied and fulfilled forever.

Instead, we discover that new-found success sometimes feels fragile. We’ve swapped our fears of scarcity and not having/being enough for the new fear of having something to lose. Now we have something to protect and guard.

We exchange the fears to which we’ve grown accustomed for the shiny new fears we hadn’t even thought of yet. What a treat.

For so long, we wanted to “get there”: more money, more clients, more sales, a competitive position, the fastest time, you name it. After we’ve gotten there, we often feel like the bar has been raised. Now we have to manage to stay there. The expectations feel higher, somehow. Maybe they actually are higher, because with power and success often comes responsibility.

You’ve landed the role, but now you’ve got to pull off the performance. While before, you may have felt invisible, now that you’re on stage, people are watching and there are critics.

Think of it like this: a leader whose won an election is made a leader overnight, but their ability hasn’t magically changed with the bestowing of an important title. A new mother, holding her baby, doesn’t automatically know everything she’ll ever need to know about parenting. They’ll have to grow into it, becoming the person they’ll need to be in the new role they’re now holding. They’ve made the leap, but they’ll need to grow their wings along the way.

There are the good old feelings of being a fraud, worrying that you might not actually have what it takes to play in this new league. You might have new competitors and they might be pretty damn worthy and intimidating.

This imposter syndrome might lead you to wonder if you just got lucky. And from there, you might start to worry about when your luck might run out, which is a great way to avoid sleeping at night.

There are also the new logistics. If you wished you had more clients and then you get them, suddenly your time feels much more scarce. You might feel like you’ve gained financial freedom, only to find yourself losing the freedom and spaciousness of all the free time you used to have, likely took for granted and even resented back then on the other side of what you have now.

On this side of succeeding, there are a lot of stories you may need to revise. Stories about yourself and stories about the world and how it works. Those old beliefs might not fit now that you’ve succeeded, and that can be disorienting and confusing.

If you’ve always thought of yourself as an underdog, but now you’re on top, how will that story work now? If we don’t address the beliefs, we’ll hamstring our success, which often looks like hitting an upper limit and then getting bumped back down, maybe back “down where we belong”, according to our fears, insecurities and the voice of our survival mechanism or inner critic.

This is where you see immensely successful people, even celebrities, who keep winning and then losing it all, ending up in bankruptcy over and over again. They have grown out of their circumstances, but haven’t distinguished the stories and beliefs that led to those circumstances to begin with. If you’re not aware of a belief, you can’t change it.

Realizing that getting what you want doesn’t solve all your problems and alleviate all your anxieties and quell all your fears, doubts and limiting beliefs is a lot to come to terms with, when you thought you’d finally just be happy because you succeeded. You thought that if you could just get “there”, you’d be satisfied, only to discover that wherever you go, there you are.

Growth is uncomfortable and often scary. It looks great when we’re on the outside, looking in at someone else’s highlights reel, but that’s not the full picture. We are vulnerable when we are growing, because, like a lobster who has outgrown its shell, it can take a while for the new shell to form. In the meantime, we’re just feeling raw and naked and unprotected, because we are vulnerable. We’re a bigger lobster, yes, but it comes at a cost, at least at the beginning, while we’re growing into ourselves.

I’m not saying any of this because there’s anything wrong with any of it, or to convince you to stop going after whatever it is you want. Quite the opposite, actually. You know me: I’m all for dreams and goals and going for it. Life is short. Dooo the thing.

And, I think it’s really important to talk about the other side of things; the parts we don’t talk about but all experience. Keeping this stuff secret means we feel alone and wrong, when we can all relate and feel so much better when we do. Keeping common shared experiences a secret leads to us thinking something is wrong when it’s completely normal and predictable and very, very human.

I’m sharing this because fear and possibility are always evenly matched, no matter how much we tend to be surprised by them. If you’ve created success, you’ve created more possibility and its twin, Fear, is growing to match. This is normal, even if we’re constantly startled by it. If we know it’s normal, we can learn to expect our Fear to show up. It might not make it any less scary, but then again, when I know my Fear is to be expected, I’m a lot less surprised when it arrives, which makes me feel like I can handle it, because I’ve handled it before.

Maybe you’re not there yet. Maybe you’re still trying to get to wherever it is you’re trying to arrive. This isn’t a one and done. This is a cycle in which we’ll find ourselves over and over again in our lives. I think it helps when we remember we’ve been here before, we’ll be here again, and however we’re feeling about wherever we are, our feelings are real, valid and totally normal, just like everyone else’s.

Here’s to your successes, and mine, and everything (and I do mean everything) that comes along with it.