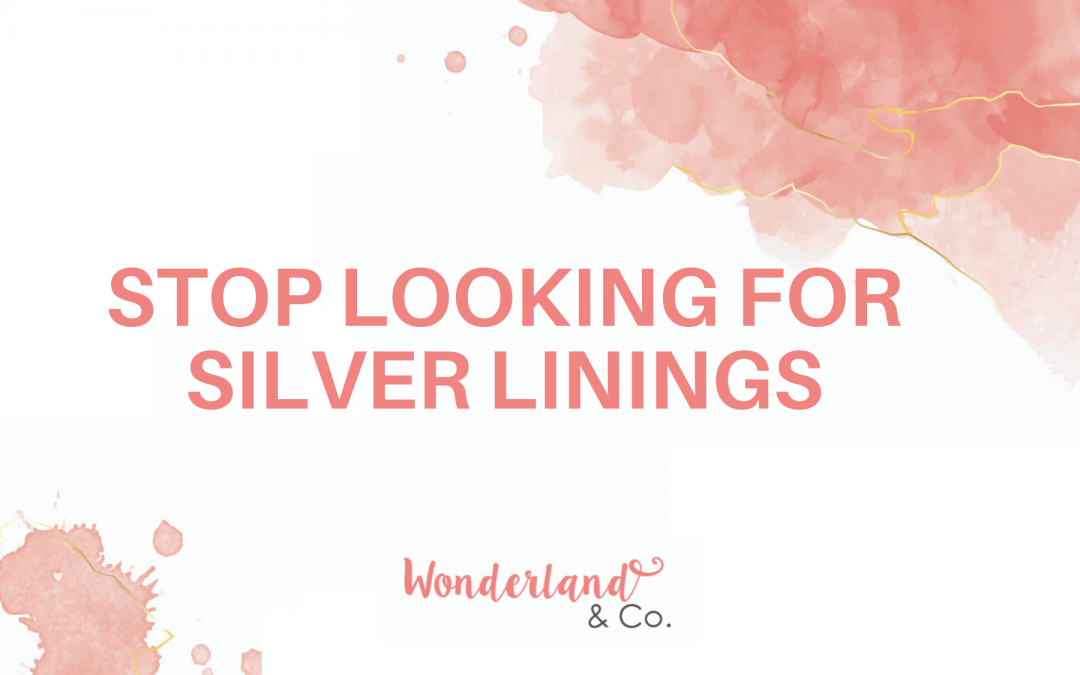 Let me begin by stating that, for the record, I have no problem with finding bright sides, being optimistic or having a cheerful disposition. I have been accused of all of these, and for good reason.

And, that being said, I hate the term “Silver Lining”. I have an immediate reaction to it when I hear it. I feel resentment and annoyance. I think it’s not a helpful phrase.

Have you noticed how hard it is to have a bad day/month/year? I mean, it’s hard enough, given that you’re having a bad go of things, so that part’s pretty obvious.

What I mean, though, is that if you are having a rough time with something, it can be hard to just let yourself have a bad time. It’s hard for anyone else to let you have a bad time, either. There are certain feelings or thoughts that aren’t allowed, based on polite and public opinion, and yet, we all have those feelings and thoughts, frequently.

I’ve noticed that if we have a concern or complaint, and we share it out loud, someone near us—possibly including ourselves—will inevitably chirp in your ear that it could’ve been worse, or that you’ve gotta find the gold, or look for the silver lining, or some such benign and ultimately useless advice.

This is because a bad day or complaint generally isn’t allowed to just be; it must be resolved by seeking the silver lining, or transfiguring it into something less crappy and therefore more acceptable. Look at all of us wizards, pretending we’re at Hogwarts!

You can have a bad experience and good can come out of it. Bad news and bright sides are not mutually exclusive, nor do they cancel each other out. Both are allowed on the table, which is good news, because in life, they both will be.

Have you ever noticed that when someone (yourself included) tells you to look on the bright side, you have a reaction to the advice? It might be subtle, or zip past so fast you almost don’t notice it, but it’s there, and it says, “You’re wrong to feel the way you do.”

You might feel annoyance and resentment towards the reproach, or maybe shame for not getting where you should be, to ALWAYS GRATEFUL ALL THE TIME sooner, like a good person, which apparently, you aren’t.

Remember when you were a kid and your parents would look at you reproachfully and ask, “Now, what do we say?” just before you were about to say thank you to Great-Aunt Whomever for the whatever she just gave you? Even if you’d been just on the cusp of expressing your gratitude (because—contrary to your parents’ express beliefs—you were not raised by wolves or in a barn), suddenly, you didn’t want to say it, did you?

Besides, if you said it after they asked, it looked like you were only saying it because you were reminded to be grateful, instead of being able to express your gratitude in your own way, in your own time.

You felt like you’d been backed into a corner, and your timing and your sovereignty were challenged. You felt like your way of doing things or expressing something was wrong. More to the point, you feel guilt and shame: you shouldn’t feel or think the way you do. It’s wrong or bad of you to feel or think that way, and you are wrong and bad because you do.

This is what happens when we insist on finding the silver lining, either for ourselves, or for someone else. It’s well-intended, because the intention is to reduce suffering, but that’s not actually what happens. Now you’ve got guilt and shame for suffering, all piled on top of the suffering itself.

It’s jarring. When it comes to finding the opportunity in the obstacle, it’s not that you weren’t going to get there eventually, even quickly, but that you weren’t quite there just yet. Now, it feels like you’re wrong for being where you are, and you’ve got to get yourself somewhere else instead.

The thing is, you can’t leave a place before you actually get there.

Maybe it’s true that there’s some gold in the crap hand you’ve been dealt. Maybe you already know that, but just feel like venting. Maybe you don’t know it yet, but will be able to see it more clearly once you’ve been able to vent your frustration, fear, concern or complaint. Or maybe the whole thing just stinks and you don’t want to find meaning in it at all for at least two years and possibly never, which is also an available option. All of these are totally okay and totally normal (that last one will probably cost you some joy and peace of mind in the long run, but you can still choose it if you so see fit).

There are lots of good things and opportunities that have come from difficult times, this current pandemic included. The opportunities created by hard times don’t cancel out the discomfort, pain and suffering, though they may help us create meaning in the aftermath of our experience.

Here’s the thing: we don’t have to find a silver lining in order for something kind of crappy to be okay. Difficult times don’t require permission. Clearly (who’s giving out those permission slips?).

We don’t need to magically whisk a negative experience into something positive in order for it to be okay that it’s happened. Yes, you might get there eventually, but then again, maybe you won’t ever really be glad of what happened.

It’s like spraying perfume to cover up body odour, or painting turds with glitter. It just doesn’t work.

You can paint a turd with glitter, but it’s still gonna smell like shit.

And that’s just confusing. After all, its appearance is not the most offensive aspect of a turd. It stinks, and no amount of glitter is going to cover that smell.

When we insist on finding the silver lining of some unfortunate happenstance, we are actually robbing ourselves of the opportunity to feel what we feel, and process that experience and the emotion that accompanies it. This gums up the machinery: it makes it harder to move forward.

Not getting to express something that is true for you, or feeling like you must find something good about something bad before you’re good and ready to do so can act like an emergency brake, and it’s hard to drive when that’s on. We’ve all done it, and know it can be done, but it’s difficult and wrecks your car in the long run. Same goes for yourself.

When you try to immediately transform some negative experience into something positive and therefore acceptable, you rob yourself of the opportunity to become resilient. Resilience only occurs when we grow through what we go through; not when we bypass it with faux positivity, bright sides and silver linings.

Instead of creating resilience, the knee-jerk reaction to turn something negative into a positive in order for whatever happened to be acceptable creates rigidity and fragility. We become anaphylactically allergic to anything that isn’t wonderfulrishically favourable. When difficulty arises, instead of being able to roll with what Life serves up, we crumble or break. We end up living a smaller version of life that feels safer, but actually isn’t.

You are not, in fact, the General Manager of the Universe, so tough stuff is going to happen, despite your best efforts to avoid them.

Some things that happen are really hard. Some things just suck. Even if some good things ultimately come from difficult circumstances, it doesn’t mean that you have to be ingratiatingly grateful for the tough stuff. You don’t have to feel positive about a cancer diagnosis or a sick child. You don’t need to find the gold in the loss of a loved one, or a car accident, or a house fire, or a global pandemic. It’s not made okay because something positive came out of it in the long run. It just is what it is (positive or negative), separate from what came of it.

You’ll move through whatever you’re feeling if you allow yourself to feel and experience it first. To allow whatever meaning you’re making of the bad (e.g. this really sucks). Maybe from there, you’ll find the opportunity available in the obstacle. Maybe you won’t. But you have a much higher chance of getting there if you let yourself admit that the hard part is really hard.

What happens after the tough stuff might be good, or helpful, or life-changing, or even awesome. That’s cool. Hurray! Celebrate that stuff! Just because something good came of something bad, doesn’t mean that something bad is/was good. They may be related, sure, but they are separate, too.

Don’t look for silver linings in order to make something difficult to feel acceptable. Whether it’s acceptable or not, it’s happened.

You’ll look for the bright side when you’re ready to find them. If you let yourself be where you are, you will be ready for what’s next soon enough.