How to Stop Getting Stuck at “I Don’t Know.” 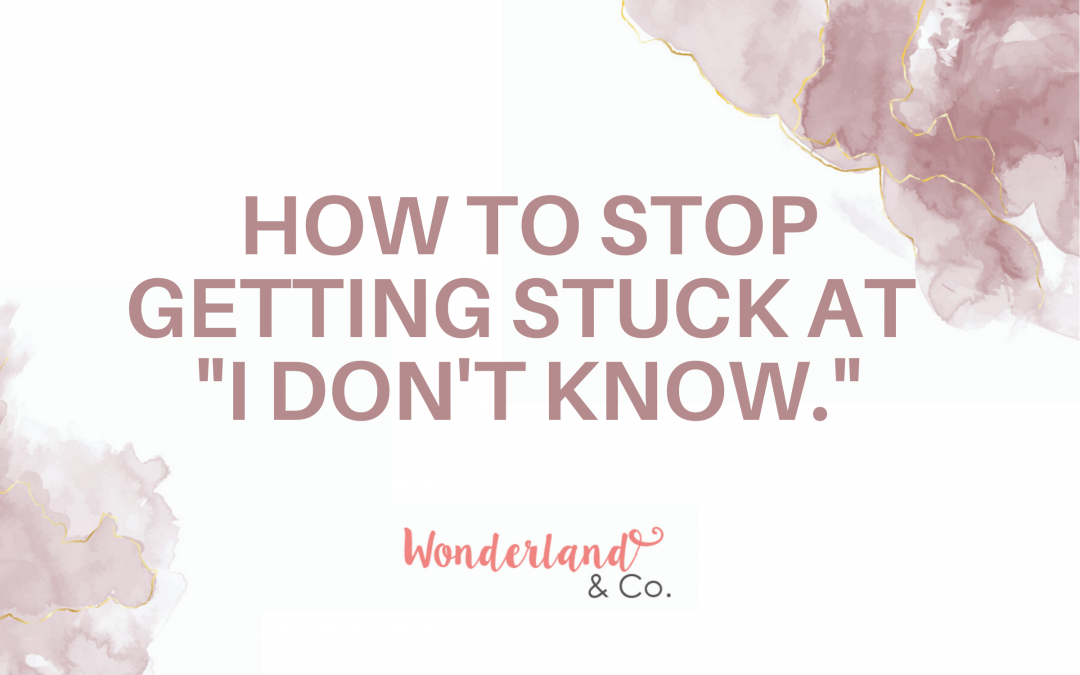 What comes after “I don’t know”?

What happens when you don’t know the answer, or the path ahead? Do you just shrug and give up? Is “I don’t know” the end of a conversation? Most of the time, I’ve noticed, it seems to be.

“I don’t know” very often turns into I give up. We use “I don’t know” to change the subject and move on, without exploring the actual answer.

I think saying “I don’t know” as a final answer is lazy. It’s as satisfying from you as it is from a sullen teenager who never seems to answer anything, ever.

Often “I don’t know” is code for “I don’t want to talk about or even think about things that I don’t understand, or that stretch me out of my comfort zone, or result in me being seen learning something.”

Getting curious and continuing the conversation after admitting I don’t know something means I am admitting my ignorance of something, and that’s hard to own in private, let alone in public. We’re all so busy keeping up our appearances and maintaining our comfort that we’ll easily rely on “I don’t know” as a complete response and not as a motivation to find out, discover, reflect or learn.

What if, instead of saying “I don’t know” as the end of a conversation, it was just the beginning of a new one?

For sure, there’s nothing wrong with saying you don’t know, especially when you really don’t know the answer, or what to do, or what comes next. There’s no shame in not knowing something, even if it seems like we should already know it. Remember, once upon a time, all of us had to be taught how to use a spoon, and it was very thrilling for everyone in the vicinity when we did it. The people rejoiced.

Generally speaking, I’d say learning is a pretty human condition, and not knowing is a necessary prerequisite for learning, not a thing to be ashamed of and avoid. You can’t learn something if you know it already. Plus, we can’t know everything, even if we want to pretend we do. There’s always something we don’t know.

I’ve noticed, though, that we tend to throw the phrase around less because we really have zero idea as to what next steps might be if we took twelve seconds to actually think about it, than we employ it as a strategy to get us off the hook. I think we say “I don’t know” when we do know, but are avoiding taking responsibility for our thoughts, ideas, and actions. We use not knowing to buy ourselves time, and put off decision making, and drawing boundaries. We use it to get out of taking action, and possibly being wrong or looking stupid.

I’ve also noticed that it’s a slippery slope. Once we start saying “I don’t know,” I think we start to believe that not only do we not know, but we don’t know what to do about not knowing. Our words have power, and if we keep saying we don’t know, we’re liable to start believing it.

While “I don’t know” is a complete sentence, it’s not a very satisfying answer, is it? Especially if there are proceedings and opportunities hingeing on the decision.

For example, imagine if you and I went for ice cream (one of my favourite activities), and there were so many flavour options that you felt overwhelmed. If the scoop-wielding employee asked you what you’d like, it would make sense if you replied with “I don’t know.” There are so many flavours, after all! You haven’t even read all the flavours yet; there are 47 to choose from!

Here’s where it gets interesting, though: what comes after “I don’t know”?

I presume you wouldn’t be so overwhelmed by the plethora of delectable options that you’d just give up and walk out without a cone. “I don’t know” doesn’t mean “I’ll never know so I’m tapping out for all of time and I’ll never eat ice cream again.”

It just means you need a bit more time so that you can educate yourself and weigh your options.

I don’t really care if you don’t know—there are a lot of questions I don’t know the answers too, either—but I do care about what happens next. I’m much more interested in what you’re going to do next than whether or not you know the answer immediately.

Do you make a random choice, closing your eyes and just choosing something/anything with fervent Hail Mary? Do you research for All of Time, so as to ensure that your choice—when you’ll finally land on it—is The Right Choice? Do you go ask someone/Google it/think/journal about it?

This may seem like an obvious point, but when you don’t know what to do, you have options. Many of them, in fact. Contrary to how you might feel about it in the moment, not knowing doesn’t preclude you from making a choice, or taking action, or the responsibility of resolving the question you face.

When I think of all the debates raging in the world right now—and there are A HECK OF A LOT of them, about serious issues—I think that, while it’s fine that you didn’t know something, it’s not fine to remain willfully ignorant in the face of better information.

If we’re going to make this world and our lives better, we’d better stop saying “I don’t know” and start saying how we’ll go about learning and taking action in the future.

What if “I don’t know” didn’t mean the conversation was over, or that you give up?

What if “I don’t know” was just the beginning of everything that comes next: curiosity, learning, discovering, creating and choosing/trying things out?

What do you have to lose if you stop letting “I don’t know” stop you? What might you have to gain?