How to Make People Change: Part One 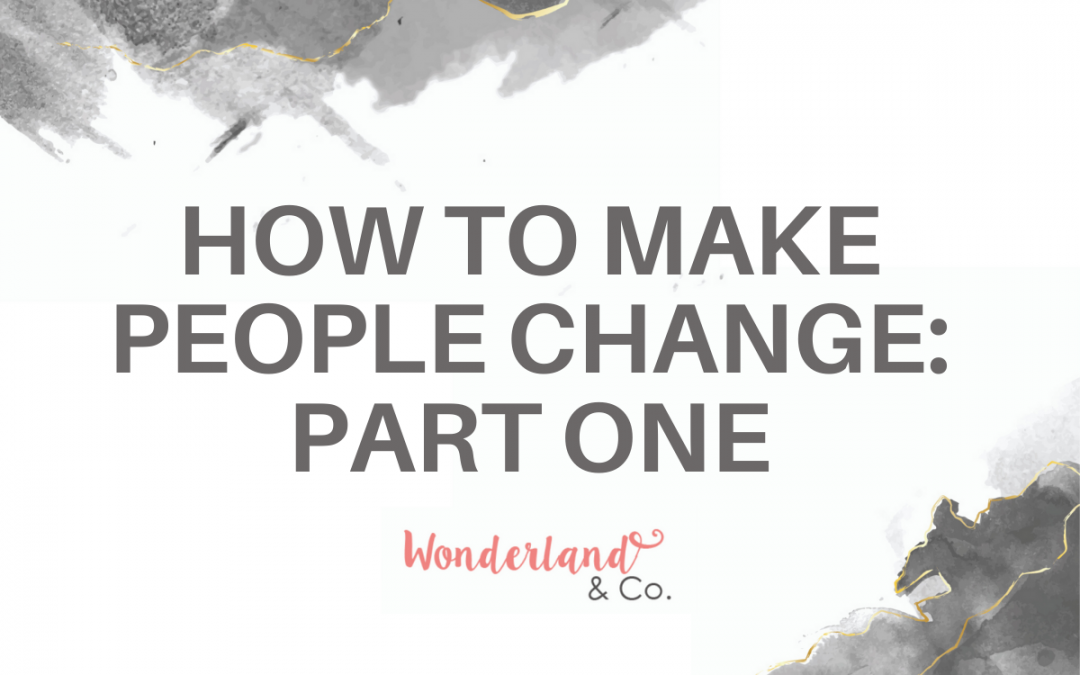 Okay, so that headline is pure fantasy and nothing else. How to make people change? Easy. You don’t/can’t.

You and I? We can’t actually make anyone change. This is true, and we both already know it, because you and I both know that we have tried to change people before—oh, how we’ve tried and hoped and wished—and it didn’t work, did it? Nosirree, it did not.

That being said, there are certainly ways to promote new ideas and get people on-side. We may not be able to actually change people’s minds or behaviours, but we can do our best to be allies for change, and to create an environment where change is more apt to occur.

This is where calling people in becomes an important skill to master. Truth be told, though, you don’t have to master it; it would be enough simply to practice it, especially since we’ll have plenty of opportunity, given the current state of global affairs.

In order to give each enough space (and in order to make a 2,200+ word essay less onerous to read), I’ve broken the steps down into one step per post.

This week, we’re looking at step one: being responsible and taking ownership of our own resistance to change before expecting others to do the same.

Being Responsible versus Being Righteous

The main idea here is that we need to do our own work, first, before we hold other people to any standard we ourselves aren’t quite hitting out of the park.

This means that if we expect other people to understand their blindspots, then we’d better be practicing seeing our own.

This is tricky, since blindspots are so named because we can’t see them, at least not without some kind of intervention or assistance. Think of your blindspots when you’re driving in a car—we have mirrors and back-up cameras and shoulder checks and we still didn’t see that car in the lane next to us! Where’d it come from?!

If we can be surprised by our blindspots with that many doodads to help us see them, then imagine how hard it is to see our belief-based blindspots all by ourselves. We need other people to reflect what we’re saying and doing, so that we have any hope of understanding the thinking and beliefs upon which our ideas and actions are based.

Think of it like seeing someone else’s face: you can see their eyes, their nose, their mouth, their ears. And you know that you also have a face, of course, but you don’t see it unless you look in a mirror. Your own eyes, nose and mouth are in your blindspot, let alone anything else outside your periphery vision. You know you have ears, but you can’t see them without assistance.

It’s easy to condemn people for their blindspots, especially if you are impacted by the consequences of them, or can see those impacts on others. But if we’re actively seeking out our own humanity, then we might have some appreciation and understanding for someone else’s humanity, too.

And, if we are doing our own work to uncover our own hidden blindspots, then we might be appreciate and notice other people doing their work, in their way, or at least be able to understand how difficult it is to change behaviour and beliefs, because we’re trying to change our own.

That person you’re calling out? They might be working on whatever it is you’re calling them out for. How much do you like it when you’re trying to do or learn something new, and someone berates you for being where you are in your process?

Taking responsibility doesn’t mean you’re to blame. It simply means that you take a look on your side of the fence before you get busy pointing to your neighbour’s messy yard.

Where have you been complicit in problematic issues? Where have you held a belief that ended up being false? When have you done things that seemed right at the time, but then had consequences and impacts you didn’t foresee?

For example, the first time I heard the phrase, “Black Lives Matter,” I had read it somewhere on social media. My instant and dismissive response was, “Of course Black lives matter; ALL lives matter, so that includes Black lives.” I wasn’t wrong, but I didn’t understand the nuance of the phrase, and the reality of the difference in experiences lived by Black people from the world I knew as a white person.

For years, I ignored the conversation and kept my mouth shut, unwilling to question my belief that I was on the right side of the debate. Now, I know better. I have read and listened and learned. Now, I understand that saying, “Black Lives Matter,” is not saying that other lives don’t matter, but that attention must be diverted to the houses on fire, not the houses that are safe.

At first, I was ashamed to learn what I learned about white privilege and white fragility. That makes sense, though: learning is always a vulnerable place to be, let alone when it’s something that is painful and socially divisive. Now, I realize that I was uncomfortable with learning something that was uncomfortable to learn and uncomfortable to own in myself, and that the discomfort is normal. I get that I’m not “right” now, nor was I “wrong” then; I simply understand better, and know that I will need to continue to actively learn about racism and my part in it, in order to be able to see it, and change it.

If you take on being responsible instead of being righteous, you’ll find people might be more inclined to listen to you. You’ll be more busy working on your own blindspots, and that might inspire people to work on theirs.

The added bonus here? Being responsible and owning your own humanity means you get to avoid being a hypocrite, expecting perfection from everyone else, without being willing to look in your own messy backyard.

To sum up, we can practice calling people in by practicing taking a beat to notice what we can’t be with over there, and look for it over here.

Calling people in requires opening, first ourselves, and then those whom we wish to see shift. The easiest way to practice is to notice when you feel yourself closing, or contracting, and see which of these four steps would open your heart and expand your view.

The more you practice owning your blindspots and being responsible with yourself first, the more likely you will be successful at calling people in, because you walking your talk is a powerful advertisement for change and transformation.