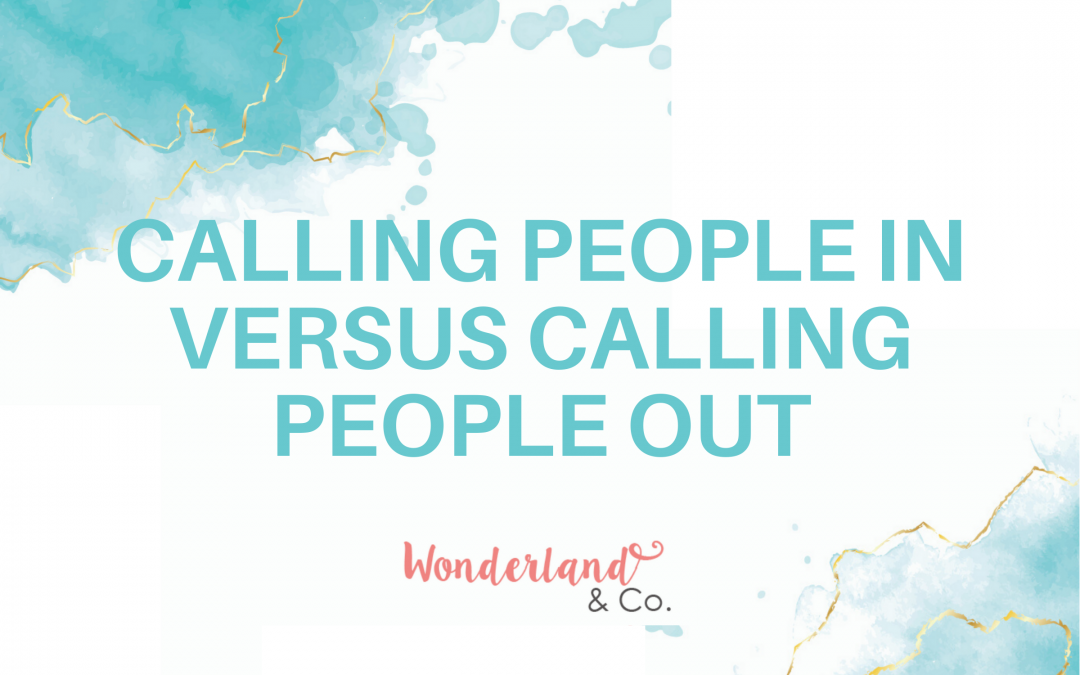 You know when you’re driving, and all of a sudden you hear the blast of a car horn erupt from out of nowhere? How jarring that is?

There’s the swift rush of adrenaline as you try to figure out where the sound is coming from and what the danger is you’re unwittingly facing or creating.

When you realize that the other driver was alerting you to a potential disaster, you’re grateful, but still shaken, as you contemplate what might have been.

Other times, though, you look around and realize that—thank God—there’s no impending collision: just someone throwing a tantrum from behind the wheel.

A honking car horn calls you out, and wakes you up.

That’s the purpose of calling someone or something out: to wake them up, get their attention and even to shake them up.

Calling people out seems to be a fairly popular pastime these days. And Lord knows, there’s ample fodder for which to call out. Any side of any debate, you can hear people calling out other people from sea to shining sea. Masks, vaccines, distancing, elections, systemic racism and individual complicity, allyship, sexuality, gender, personal rights and liberties, chocolate, vanilla… Literally any and everything is being called out, it seems.

Now, before I go any further, I want to say that I don’t believe there is anything inherently wrong with calling people or institutions out. I think it’s often necessary, because Lord knows, being “reasonable, polite and nice” on their own seem to make absolutely no difference when it comes to transforming prevailing institutional and cultural norms that are woefully outdated.

Calling out is important.

Think of revolution—any revolution: French, American, you name the revolution—it’s not like the ideas weren’t around and people weren’t discussing them and lobbying for change. The conversations in favour of change were happening, but those in power (especially those benefiting from the way things were) ignored the “reasonable” requests, because they were reasonable and therefore easy to ignore and suppress. Ignoring and suppressing is a lot harder to do when the people rise up together and cut off your head and the heads of all your friends and family.

So, no, there’s nothing wrong with calling people or institutions out. And if you’re a leader, you’d be smart to listen when you or the institution you lead is being called out, because when people don’t feel heard, they will get louder, and the window for collaborative transformation and change will get narrower until the situation becomes dire and chaos reigns. And while good things can certainly come from upheaval, they don’t necessarily only rely on tragedy as a prerequisite

You know what it took to end feudalism and serfdom in the Middle Ages (when literally everyone who wasn’t a noble was basically a chattel slave)? It took a plague. When the Black Death (aka the Bubonic Plague) swept across Europe and Britain, it wiped out upwards of a third to a half of the entire human population, indiscriminate of wealth, power, prestige or poverty, which effectively dismantled feudalism, because there simply weren’t enough nobles to keep the system going.

When systems are unsustainable, the system will right itself one way or another. Humans are pretty stubborn, historically speaking. Or at least, they are stubborn when it comes to anything that grants equal rights and freedoms, lest it perchance mean any reduction in the power and privilege of the ruling elite.

But if we don’t want a bloody revolution—human- or nature-made—then we’d do well to listen to the messages being called out.

And we’d better learn to practice calling people in, too.

We need to practice calling people in, because otherwise, people will grow weary of all the racket, and begin to tune it out. Remember that horn blaring from behind you on the road? That gets your attention, sure. A chorus of horns and sirens, though? That is actually ignorable. That’s just the sound of New York City. We call that white noise, and play it to help our kids fall, and stay, asleep. We grow numb to the cacophony of noise.

We need to practice calling people in, because, as Ruth Bader Ginsberg said, “You don’t win an argument by yelling.”

After the calling out, we need to call people in. Otherwise, they are simply reacting, and avoiding, which changes nothing. It’s like pretending to not see colour as a solution to racism (it isn’t). People just shutter their doors and ears and hearts, to avoid being yelled at.

Calling people in is a way to calibrate your tone and volume. It provides you with range, which means you can reach more people, more powerfully.

Calling people in means that once you have their attention, you are able to help them to see what is happening, and what could be possible, and what needs to happen to make that possibility a reality.

Calling people in is what comes next.

Calling people in enrolls them in a vision of the world you want to see possible, so that they can see it, too. It calls them into solidarity and community and conversation and action.

Calling people out gets their attention. It’s a short fuse, a flare.

Once you have it, though, calling people in is what comes next. It’s a raging wildfire that spreads, forging lasting change.