How to Get Off the Fence 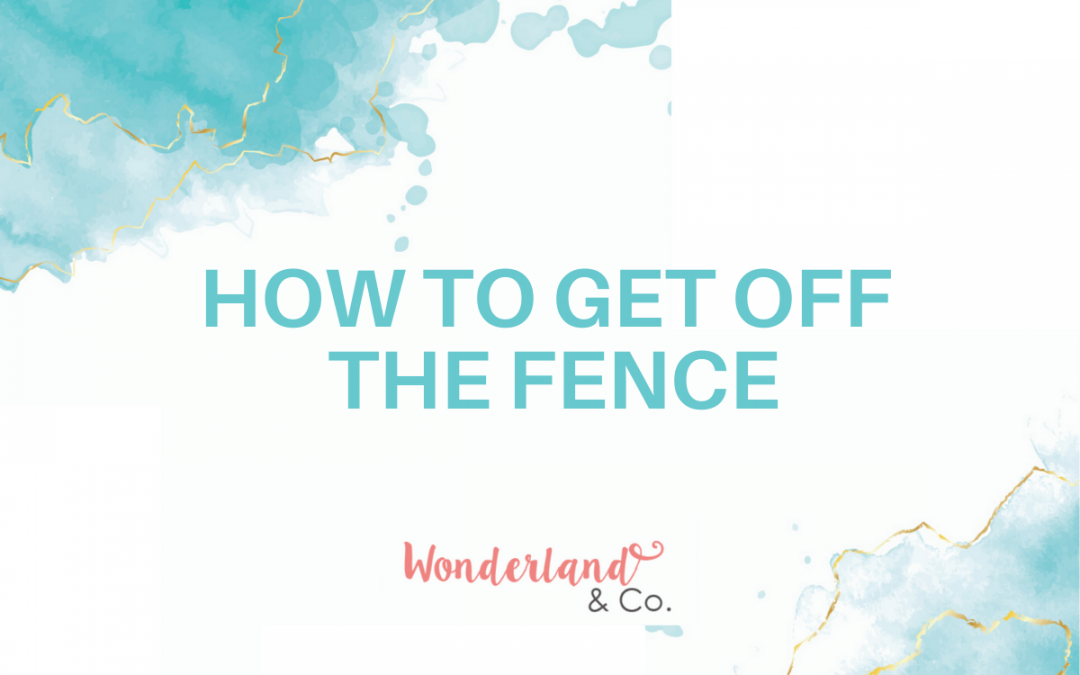 So, I make decisions really easily.

Based on the discomfort I’ve witnessed in a lot of other people when it comes to making a decision, I’d say I’m able to avoid an awful of pain and suffering. I know for a fact that most—if not all—of the people I know who really struggle with decision making would love to know how I do it so painlessly.

I’m not gloating, or suggesting that this is a virtuous quality, or that I’m in any way superior. Trust me: I have many faults and by this point, I’m painfully aware of most of them.

Truthfully, I think I probably tend to make decisions relatively easily in part because I’m far too impatient to waste time struggling with decisions over the long term. I don’t enjoy the stress and suffering that sitting on fences creates for me, and I’d rather just make the damn decision and move on to deal with it, for better or for worse.

What this has taught me over the years is that whatever choice I’m struggling to make is likely not as big a deal as my fretting about it would have me believe. I’ve learned that after this decision comes another one, and another, and another, for ever and ever, amen. It’s just decisions after decisions, all the way down.

If the decision didn’t work out (notice I didn’t say it was the wrong decision), then I make sure I choose differently next time. From menu options to vacation plans and haircuts, my choices are just one decision out of many. Whatever I’m trying to choose is likely not going to be the last decision I make, and if it is, well, then it probably doesn’t matter that much, does it?

Now, I’m not suggesting that you just make decisions flippantly or thoughtlessly; you can research and inform yourself, but at some point, you’re just going to need to choose something, or you’ll wind up suffering from analysis paralysis.

You may be wondering how I know if I’m making the right decision. Well, mostly I know because I decide it was the right move in the moment, even if the next moment requires something different.

This means that I need to empower my decision, rather than flounder about in criticism, judgment, self-doubt and regret, which I can all to easily do in hindsight.

I’ve found that worrying about past decisions being wrong leaves me holding out hope for a better past, while worrying about making a wrong decision right now leaves me living in the wreckage of my future. Neither of these options is particularly enjoyable, nor do they improve my circumstances or let me appreciate the present moment.

As a devout perfectionist (again, not boasting), I spent a good many years trying to get everything just right, and my conclusion is that doesn’t work and it’s not that fun.

And honestly, between my own anxieties and the voice of my survival mechanism, I’m hard enough on myself as it is. My inner critic is no single voice; it’s a loud and proud hallelujah chorus.

I hardly need more ways to disempower myself, and neither do you.

I’ve found that my decisions either tend to move me in the direction I want to go, or they move me in a different direction. Whether it’s the right choice or the wrong one is a decision I’ll make after the fact, and so I’ve gotten in the habit of deciding my choices are the right ones, simply because it makes me happier, more willing to make more choices and take more actions moving forward.

By the way, another handy life hack is to remember that when it comes to empowering my decisions, we have to actually take some action. Choosing and deciding is great and all, but it’s mostly a mental exercise until we actually DO a thing.

This means that you’ll feel like you’re making a decision, but all you’re really doing is engaging in a philosophical exercise about deciding to make the decision. You’re worrying, stressing, counting pros and cons, and every time you think you’ve made a choice, you turn around only to discover that you keep getting stuck back on the fence again. Your poor wazoo!

You can’t figure out why nothing changes when you’ve made the tough call over and over again. Lord knows you’ve been suffering; surely that must mean something.

I suppose it does.

Decision fatigue is rough, but so is the fatigue of never making a decision, especially when you think you already did.

If you want to get in the water, thinking about it isn’t going to be enough. You’re gonna need to actually get in. It doesn’t actually matter how you do it: you can use the ladder, or you can jump in, head or feet first, but until you’ve made a splash, you haven’t really gotten off the fence post.

Decisions and choices are just ideas until you take the action.

It’s as simple—and as difficult—as that: make a decision, then act upon it. Then make a new one, and act upon it, too.

You’ll find there’s no shortage of new options ahead of you, if you’re willing to let go of the ones you’re holding onto.