How to Get Unstuck 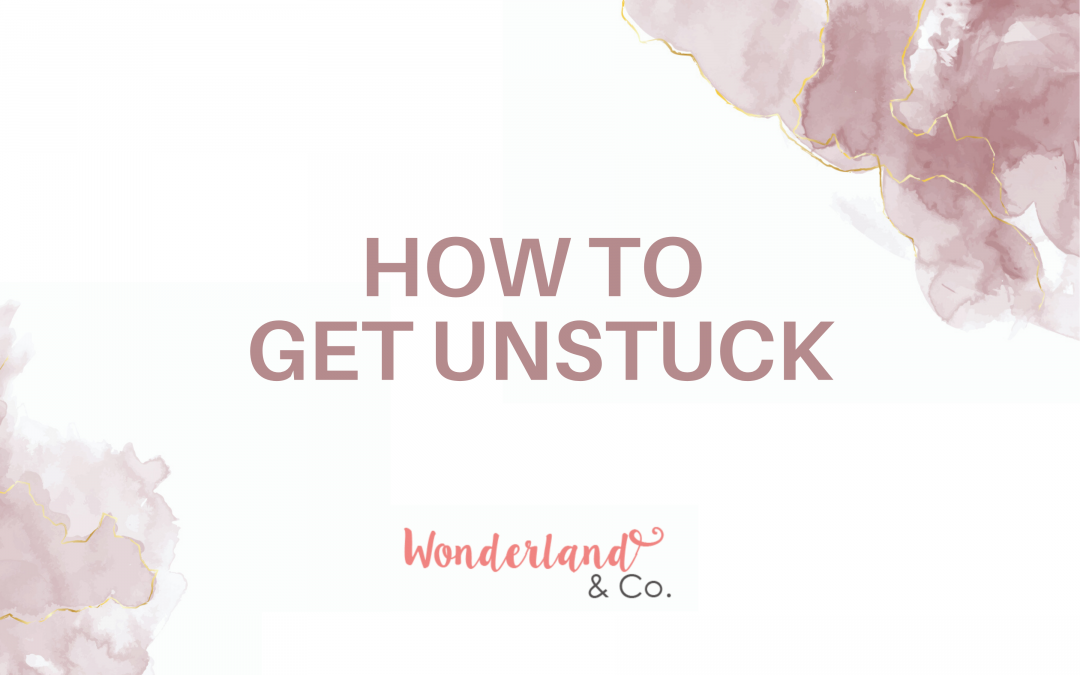 Have you ever had the experience of wanting to do something new or different, only to find yourself unable to make yourself get up and actually go Do The Thing?

Of course you have; you’re a human and this experience is common and normal.

When it comes to things we don’t do and actions we don’t take, the possibilities are literally endless.

The moment we make a commitment, a number of very predictable things happen. Once you’ve decided to do a thing, you start to get excited. You tell people. They agree that it’s a great idea. You start to notice that opportunities begin to show up. Everything is a sign you’re moving in the right direction.

I know this phenomenon. It works wonders. When you commit to something—I mean really commit, not just talk about maybe doing it, someday, but when you have actually decided to do it—it’s like a set of great universal gears get into motion, and you find assistance and evidence to corroborate your decision and help you on your way.

But what we don’t expect is what inevitably comes next. The part where we become daunted by the immensity of what we’ve undertaken. The fear and doubt that shows up. The imposter syndrome, whispering its poisonous things into our minds.

This is what happens whenever we’ve chosen to move towards a dream, a goal, a desire, because it is a universal truth that Fear and Possibility are always equally matched (although we universally forget this all the time).

The bigger the possibility, the more fear we’ll experience. So, after choosing to follow a dream, we begin to decide that the fear is also a sign, but rather than a sign that we’re going the right way, we decide it’s a yield sign. A warning sign.

None of this has to be a problem, though. I promise.

This part is also all normal. What movie sees the protagonist feel one hundred percent ready to embark on the adventure, which then goes perfectly according to plan? That would be a boring story for our heroes and for ourselves, too.

So then, if none of this is a problem, why do we get stuck?

Let me tell you. It’s because we don’t just feel our feelings, we begin believing them and becoming them. And from there, we don’t take enough action (or any action at all, as the case may be). We don’t create enough structure to help us take that action. We don’t make a plan, or if we do, we don’t follow it.

Imagine how short and boring The Hobbit would have been if, after the dwarves left with Gandalf on the quest, we just watched Bilbo sit in his kitchen, worrying about whether or not he had what it would take to go on an adventure.

We need to take action, not only to move our goals forward, but to move us out of the mud of our fear and doubt. Sitting around, avoiding action leaves a lot of space, and I promise you that space will be filled by fear and doubt, which is not going to help you at all. Sitting still is as bad for you metaphorically as it is physically.

When we have a commitment, but take no action, the desire and fear get all mixed up and it doesn’t feel good. It becomes a toxic mix. It’s like pouring sugar in your gas tank: it’s sabotage and you’ll wind up more stuck, mired deeply in self doubt and self loathing.

“Maybe I just don’t want it enough,” your Fear will whisper to your heart. “After all, if you really wanted it, you’d be doing it by now.”

The poison drips into your heart, leaving you feeling numb, which should be a relief from the pressing fear and desire, but somehow feels worse, instead.

Who am I kidding? This thing I want? It’s not for me. I don’t have what it takes. I don’t deserve it. I can’t.

The trickiest part is that you think, “I can’t,” but what’s actually happening is, “I won’t.”

You feel a low-grade dissatisfaction and discouragement, which, combined with taking no action, starts to look and feel a lot like depression. It might even become depression. People might worry about you. You might stay here a while. From here, it gets even harder to do anything. Your well-being starts to slide and you stop doing the things you normally do to take care of yourself.

All you can do is sit on the couch and watch TV or scroll on your phone, numbing out. You feel awful. Flat line.

What were you thinking? You’re in no place to contemplate that project that had inspired you before. Now, you just need to focus on getting more energy and getting back to where you were, and let go of grandiose plans of where you’d like to be. Those things aren’t for you after all.

And so you join the ranks of people who had a dream or wish that life was different, but are stuck where they are, feeling safe, but dissatisfied and a little more resistant to trying than they were before.

All of this is normal. But it doesn’t have to be the end of the story. We don’t have to stay home, knitting sweaters for our fear, giving it our master bedroom and buying its favourite breakfast foods.

What if you put half the fight you put into convincing yourself you can’t have what you want into trying anything, just for the hell of it?

If you want to get unstuck, just try taking any action.

I promise you, all you need to do is take some action, rather than taking none. It’s kind of like going to the gym. We rarely feel as motivated before working out as we do afterwards. Same goes for whatever action steps you’re avoiding. You probably don’t feel like taking them on this side of doing nothing. The reward is on the other side of doing the thing.

Another way to get unstuck is to make a plan. Even Gandalf had a map, after all.

It’s exhausting to try to do something new without a plan. Sometimes, we need to throw some spaghetti on the wall and see what sticks. But when all we’re ever doing is throwing spaghetti like a divining rod to conjure our next step, then every step is fraught with doubt and uncertainty.

So you need a plan AND you need to take action. A map without action is just wall art. And action without a plan is confusing and exhausting.

It boils down to this: if you want to get unstuck, you need to stop stopping. Sure, take the time to rest and build in recovery along the way, but if you’re spending hours/days/weeks in your head, worrying about the results you’re not seeing, what you need to do is clear your head (go outside for a walk, talk to a friend, a coach a therapist, or all of these) and then get your head out of itself and see what actual action is next.

Check your plan or make one, if you don’t have one already. Make the steps really small. And take them. If you find yourself doing nothing but feeling awful, doubtful and afraid, take a nap or take an action. Take both and you’ll really be flying.

We all feel stuck sometimes. But we don’t have to stay there.

If a hobbit could jump the gate of his fear to have his unlikely journey, so can you.